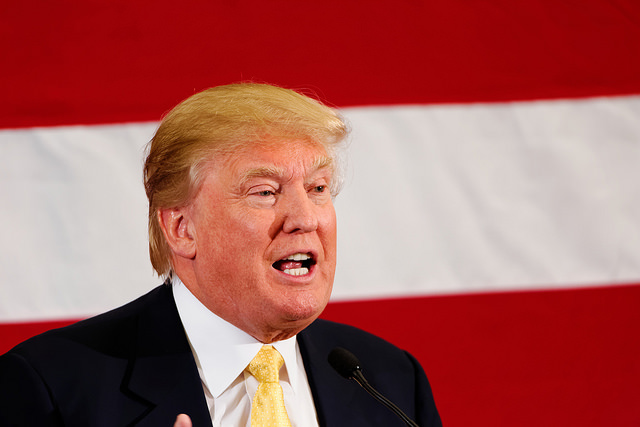 With the NFL playoffs already underway, not even sports could escape Donald Trump’s grasp as he called out USA for becoming “too soft” and compared to NFL players suffering severe concussions as “too soft.”

At a Reno, Nevada campaign rally in front of 2000 supporters Donald Trump called America’s most popular sport “too soft” and accused NFL game officials of throwing flags just to impress their wives.

The Donald then diverted his speech to Iraq and how he could Make America Great Again by really and truly going there.

What I just said about a game — so I’m watching a game yesterday. What used to be considered a great tackle, a violent head-on [tackle], a violent — if that was done by Dick Butkus, they’d say he’s the greatest player. If that were done by Lawrence Taylor — it was done by Lawrence Taylor and Dick Butkus and Ray Nitschke, right? Ray Nitschke — you used to see these tackles and it was incredible to watch, right? Now they tackle. ‘Oh, head-on-head collision, 15 yards.’ The whole game is all screwed up. You say, ‘Wow, what a tackle.’ Bing. Flag. Football has become soft. Football has become soft. Now, I’ll be criticized for that. They’ll say, ‘Oh, isn’t that terrible.’ But football has become soft like our country has become soft.

Unfortunately for Trump he failed to provide any basis of real evidence that the NFL has become soft or why head-on tackles are now penalized.

Well research has shown that there’s a great risk of spinal injury, head injury, or even death. In addition, we now know that repetitive blows to the head causes CTE, a chronic brain disease that results in memory loss, mood swings and severe depression.

A new study done on now deceased NFL players found that 87-91 of those players had CTE. And has led to the deaths of greats Junior Seau and Mike Webster.

The sport hasn’t become as soft as Trump has said. In fact there was 350 NFL players listed in the injury report during the final NFL week, not because they’ve become soft but because of the physical toll the game takes on a body.

Not even the research could save Donald Trump as he then said:

Though Trump might not be watching the NFL, but Richard Deitsch Sports Illustrated has said that the ratings had increased on all major networks.

Trump did however have some support for his main man Tom Brady by saying:

“It’s boring — although I love Tom Brady. I gotta tell you,” he said. “I do love Tom. He’s a great guy. But it’s different. But it’s become soft and our country has become soft.”