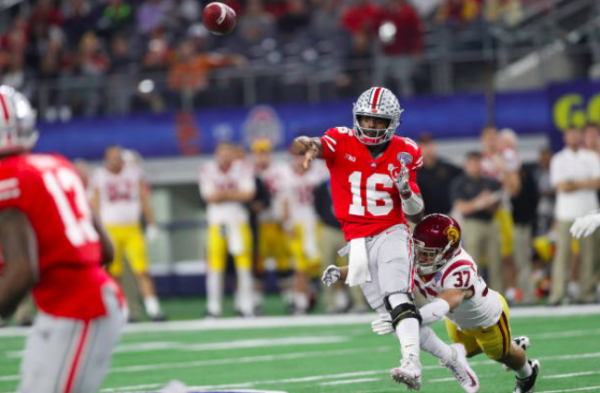 The Pac 12 is a pillow fight conference and the USC Trojans are defective:

I’ve been banging this drum since September, but the Pac-12 is the steerage conference of college football this season. I never hopped on the USC bandwagon and I’ve always said they’ve been overhyped. Their season was riddled with ugly wins, such as their wins against Texas, UCLA, and California, and they don’t have one quality road win. I even call their head coach, Clay Helton, Clay Aiken because USC ended up being so overhyped. Put simply, USC won a pillow-fight, but by no means did this make them worthy of a playoff spot.

My past assertions about the Pac-12 were further backed by reality during the bowl season by the Pac-12’s 1-8 performance. This was especially prevalent for the top four teams in the Pac-12: USC, Stanford, Washington, and Washington State, all of whom lost to counterparts in the Big Ten and Big 12. Head to head, the Pac-12 got their tails handed to them by the Big Ten as they went 0-4. Washington State and USC weren’t even competitive against their respective Big Ten counterparts. Washington lost to Penn State comfortably and Stanford lost to their Big-12 counterpart, TCU. The Big Ten isn’t even the best conference in college football (I’d say #2 but more on that later). Look at the Cotton Bowl. USC and Ohio State, both conference winners, yet these two teams didn’t look like they belonged on the same field. This game was a tea party for Ohio State. Yeah, automatic bids for conference champions sound like a great idea, but just watch the Cotton Bowl and you’ll understand why they aren’t. Imagine if any of the top Pac-12 teams had to play a top-tier SEC team like Georgia or Alabama! Yikes, hide the women and children.

For the record, by no means am I saying that the Pac-12 is abysmal purely off of Bowl games records, BUT, their bowl records against other conferences are reflective of their overall strength as a conference.

What about the Big Ten?

What about them? They’re still playing second-fiddle to the SEC. And no, the bowl records of the two conferences aren’t indicative of the popular catchphrase of the SEC being overrated because they’re playing against different conferences for the most part. Don’t get me wrong, bowl records matter, but they don’t mean everything. The conferences going head to head is a more accurate barometer. Moreover, head to head battles between corresponding teams between two conferences are telling, not when a higher ranked team in one conference outlasts the other. Yes, Northwestern beat Kentucky, but Northwestern would be number five if you rank all the Big Ten teams (Ohio State, Wisconsin, Penn State, Michigan State, and then Northwestern). Yet, Kentucky is ranked lower within their conference as a 7-5 team for the season. They finished third in the SEC East and have at least six teams in the SEC that finished ahead (Alabama, Georgia, Auburn, LSU, South Carolina, Mississippi State) and arguably seven, depending on where you want to rank Texas A&M. These aren’t teams in equal ranks in their respective conferences, yet, Northwestern beat Kentucky on a failed two-point conversion. Meanwhile, this is what Big Ten fans are crowing about. Hell, this game spoke better for the SEC than it did for the Big Ten!

The narrative that the SEC is overrated is wildly overstated this season and no matter what the SEC does, that narrative will always be repeated, not because it’s necessarily accurate, but because it makes anti-SEC fans feel better.

Michigan, I would rank number six in the Big Ten overall, behind Northwestern, while it’s fair to rank South Carolina at five in the SEC rankings, so a little bit higher than Michigan but undoubtedly a smaller disparity than the Northwestern-Kentucky disparity. Furthermore, South Carolina won the Outback bowl 26-19, which is a larger marrgin than the game-deciding two-point conversion in the Music City Bowl.

As far as the SEC’s bowl record vs. the Big Ten’s, I find that Big Ten fans are tooting their own horn a little too much. For a few years now, Big Ten fans have been pushing the narrative that their conference has surpassed the SEC, and I actually agreed with them, at least I definitely did last year. The Big Ten went 3-7 in Bowl games last year and the mighty Big Ten East went 0-5, which was widely regarded as the strongest division in college football. The Big Ten took a bigger hit to their reputation last year due to their abysmal Bowl season than the SEC did this season. This season, the SEC is 4-5 in Bowl games so far and will go 5-6 after the national championship game. Also, they will have two teams in the national championship while last year Ohio State lost 31-0 in the Fiesta Bowl and thus, had no teams in the national championship game. Sure, this bowl season is a disappointment for the SEC, but not enough of a setback to strip away their title as the best conference in college football. It’s no more of a Bowl season setback than the Big Ten’s Bowl season setback two years ago in which they went 5-5 including a 38-0 loss in the Cotton Bowl in the playoff to Alabama resulting in no teams even competing for the national championship. On the other hand, SEC went 9-2 in Bowl games two years ago, went 3-1 against the SEC in bowl games and won the national championship and… I heard crickets from Big Ten fans. Looking at the Big Ten’s two-year Bowl season hangover after Ohio State shocked the world three years ago, the hypocrisy of Big Ten fans couldn’t be more transparent. So no, it’s a wild, hysterical exaggeration to say the SEC stinks just because of their bowl record this year, sorry to burst your bubble Big Ten fans.

And no, it’s not worth going further back than the 2014 season because the disparity gets even bigger.