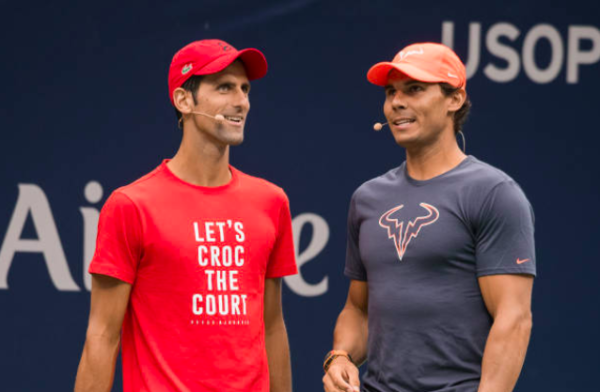 Novak Djokovic will overtake Rafael Nadal this coming Monday as the top ranked male tennis player in the world. In his first press conference at the Paris Masters, the first questions posed were not about his rapid rise in the rankings, but his exhibition match with Nadal in Saudi Arabia, scheduled to take place in Jeddah on December 22nd.

The match between the two men, who are almost certain to be the top two ranked players in the world when it takes place, has been long-planned. Djokovic and Nadal were both careful to note in their press conferences that they had signed on to play over a year ago. However, since the two agreed to play, Saudi Arabia, never a paragon of human rights, has committed numerous egregious new atrocities.

In early September, the New York Times reported on a Saudi airstrike that, “killed dozens of people, including children traveling on a bus.” This airstrike was a part of the Saudi’s intervention in Yemen, which has been underway since 2015, and which was a significant influence on the Obama administration’s decision to halt arms sales to Saudi Arabia. This has not stopped Saudi money flowing into political and cultural institutions in the United States and Europe – think tanks, museums etc. – but it has proven a stark and enduring example in recent years of the cost of accepting Saudi funds.

The killing of journalist Jamal Khashoggi in early October, barely a year after he fled Saudi Arabia, cast a new light on recent Saudi abuses. Reports indicate that Khashoggi was choked to death and his body then dismembered. The brutal killing was not only a heinous act, but it was also a direct refutation of the rhetoric of the new Saudi regime under the direction of Crown Prince Muhammed bin Salman. Crown Prince Muhammed has pushed significant domestic reforms that liberalized certain aspects of Saudi society while at the same time consolidating power. His work has often involved the silencing of critics and a solidification of personal power by any means necessary. Under the guise of fighting corruption he orchestrated a purge of powerful government officials in 2017. The killing of Khashoggi, an outspoken critic of Crown Prince Muhammed, is just the latest illiberal action taken by his repressive regime.

The Show Must Go On?

Astonishingly, Djokovic and Nadal are still scheduled to play their exhibition match. Just over two months after Khashoggi was murdered, four months after Saudi bombs killed children in Yemen, and just over a year after Muhammed bin Salman, who is likely to attend the match, purged his government of enemies, the two top male tennis players in the world will compete in a match that is not linked to any tournament, for which they will each be personally paid millions of dollars.

The funds spent on the match are notably not for charity; they are solely fees paid to the players for appearing and competing. Djokovic’s response when questioned about his participation in the match was anodyne:

“I personally try to be very apolitical. I don’t like to involve myself in any political exchange and situations. It’s unfortunate we are both drawn into this… We have the commitment with them for over a year…I know – I am aware of what’s happening and it’s sad. It’s the only thing you can feel when you see something like that and when you hear something like that…My team is in touch with people in Saudi Arabia…as well as [Nadal’s] and we’re all trying to understand the situation better because right now we just don’t have enough information.”

Nadal’s comments were no more definitive, and their similarity to Djokovic’s in content prompted speculation that the two had coordinated their messaging about the event.

“I am aware of the situation, but I have the commitment since one year ago to play there and my team is talking to them to analyze the things. That’s it. As you know when these kind of things happen it is terrible that one journalist lost his life. I know something happened very had inside there so we are looking about how the situation evolves and I hope things will clarify as soon as possible.”

Roger Federer, the most popular, best known, most endorsed tennis player in the world, was also asked about playing in Saudi Arabia at his press conference. He revealed that he was asked to play for a fee of over $1 million but declined. Though he alluded vaguely to the human rights situation, he couched his reasoning in the need to be conscious of his professional scheduling because of his advanced age. Tellingly, Federer did not take a stand against the human rights abuses of Saudi Arabia and failed to offer a specific condemnation of the regime’s recent actions simply saying, “I’m happy practicing and doing other things so I prefer not to play there at that time.”

The Limits of “Good” Men

Djokovic, Nadal, and Federer are recognized by fans as “good men” and they do good work. Just this week, Djokovic stopped play to offer assistance to a fan who fainted in the crowd during his first round match in Paris. His charitable foundation also provides support services to children growing up in his native Serbia. Nadal has organized substantial relief efforts in his home town after it was struck by disastrous flooding. Video of him cleaning up debris while he was home recovering from a knee injury circulated widely on the internet. He also opened the doors of his academy to those who lost their homes, and has organized an exhibition match to raise funds for relief efforts.

The unwillingness of these otherwise conscientious men to speak out on the human rights situation in Saudi Arabia is a poor reflection on all three, but especially on Djokovic and Nadal. Their continued willingness to participate in the exhibition is disquieting and their reasoning for not pulling out, equal parts “we signed on a long time ago” and “we know what happened, but also need more information” is disingenuous. The details of Khashoggi’s death, and Saudi Arabia’s history of human rights abuses, are well documented. The only information not yet available to Djokovic and Nadal is how their fans and sponsors will react to their participation. The statements Djokovic and Nadal made in Paris were a play for time made in the hope that the current furor over Kahshoggi’s death and the international focus on Saudi human rights abuses will have dispersed by the time they play in late December.

While this drama plays out, in a quiet exhibition hall on New York City’s Upper West Side, a different kind of history is on display. The New-York Historical Society, in honor of Billie Jean King’s 75th birthday, has curated an exhibit “Billie Jean King: The Road to 75” about her history as both a player and as a leading advocate for women’s equality and LGBTQ rights. King was a great champion on court, but off court she fought tirelessly to ensure that other women and girls had the opportunities she was often either denied or only received because of her tenacity.

King did not have the luxury Djokovic claims when he says, “I personally try to be very apolitical. I don’t like to involve myself in any political exchange and situations.” Her existence as a prominent woman in sports in the 1960s and 1970s made her a political figure. She advocated for equal pay for women’s players in the 1970s – something Djokovic has come out against as recently as earlier this year – and testified before the senate during the 1973 hearings about the Women’s Education Equality Act.

King also spoke out for LGBTQ rights. In 2009 she received the Presidential Medal of Freedom, awarded in recognition of her humanitarian work around the globe. The impetus for King’s advocacy was simple: The status quo in sport and society was one that harmed her. Rather than accept second tier status, she fought. When King received her medal of freedom, she said, “Tennis is a platform and I fight for everybody.”

The Harm of Silence

Djokovic and Nadal’s silence in the face of atrocities, at a moment when liberal values are under attack around the world, is an act of dangerous cowardice. Tennis is a global sport and its champions are international celebrities. The world is currently reckoning with growing illiberalism.  The Brexit vote, the election of Donald Trump in the United States, the election of Rodrigo Duterte in the Philippines, the recent election of Jair Bolsonaro in Brazil, and the continued closing down of societies in Turkey and Russia are only the most prominent examples of the last two years. The most recent update to the Democracy Index indicated that more than half of countries became less democratic. This anti-democratic trend has been met with indifference from many leaders in business and politics.

In the Djokovic/Nadal match we have these geopolitical issues writ small. By failing to take a stand, Djokovic and Nadal offer at worst a tacit seal of approval, and at best numb, silent indifference and allow themselves to be used by the Saudi regime. Either man could pull out of the match, regardless of previous agreements, but neither has a compelling personal reason. For them, they can arrive, play, get paid, and leave. Hopefully one or both take inspiration from Billie Jean King and take a stand against the cruelty and oppression by the Saudi government because tennis is a platform and it is one best used to fight for everybody.