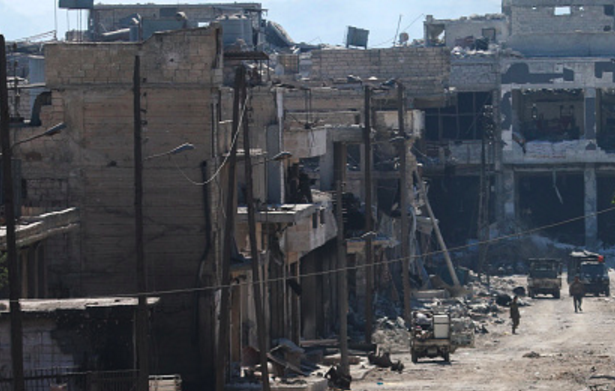 This came after the deadly attack over the weekend when special UN humanitarian convoys made their way toward the city of Aleppo. At first, the humanitarian convoys stalled crossing the border between Turkey and Syria as some moderate fighting continued to pick up. The five-year civil war in Syria is getting uglier and uglier by the day with no end in sight. Warplanes have been hovering over the western part of the city of Aleppo, where in rebel-held areas, slowing the moving of humanitarian trucks in delivering vital food and medical supplies. Many Syrians have been in desperate need of these supplies. It is a new all-time low for all ally forces.

There seems to be no peaceful reprieve from the constant shelling, bombing, and heavy artillery that have been falling on major parts of Syria where rebels, Syrian forces, and others state and non-states actors which are involved in this ever-complex civil war of multi-armed conflict are staged. The scale of the war is enormous in terms of its magnitude. In March of next year, 2017, the five-year civil war will enter a new year with the little hope to establish a complete and sturdy ceasefire. From Reuters, reported by Tom Perry and Ellen Francis from Beirut, “’It’s as if the planes are trying to compensate for all the days they didn’t drop bombs during the ceasefire,’ Ammar al-Selmo, the head of the civil defense rescue service in opposition-held eastern Aleppo told Reuters.” (22 September 2016).

Both Washington and Moscow have obtained a diplomatic ceasefire agreement two weeks prior to the UN convoy’s deadly attacks. Around the world, there was debate whether the ceasefire would hold or not, but that was not clear. John Kerry, U.S. Secretary of State, and his counterpart, Russian Foreign Minister Sergei Lavrov, had agreed to a seven-day ceasefire in order for UN humanitarian convoys to provide essential foods and supplies to displaced, hurt, and wounded civilian victims. Reuters pointed out, “President Bashar al-Assad meanwhile indicated he saw no quick end to the war, telling AP News it would ‘drag on’ as long as it is part of a global conflict in which terrorists were backed by Saudi Arabia, Qatar, Turkey, and the United States.” The whole country of Syria is being turned into rubble, where body counts amount to more killing by airstrikes hitting civilians, public places, and hospitals.

There is some disturbing news as the U.K. continues to provide a massive amount of arms and guns to Saudi Arabia, where in the south of the country another civil war is raging, killing civilians every day. Boris Johnson, the new Foreign Secretary, urged blocking arms sales to Saudi Arabia as the bombing campaign continue to drop bombs on many parts of the country of Syria. From the U.K. Magazine The Independent’s political editor, Joe Watts, “Chair Stephen Twigg said an inquiry was needed because almost 7,000 people have died in the Yemen conflict, including some 1,100 children.” There have been reports from the United Nations that the Saudi Arabia has been using U.S. supplies to fight against a serious rebellion by Houthis, which is a Shia Muslim minority that is located on the north side of the country. That rebellion and the militia is supported and backed by Iran which makes the situation on the ground more difficult to assess.

While the conflict in Yemen continues, Boris Johnson has been reported as saying, “Earlier this month, Mr. Johnson said the test of continued arms exports is ‘whether those weapons might be used in a commission of a serious breach of the international humanitarian law.’” At this point, there is possible evidence that war crimes, violation of international law, and brokered truce are all signs that the civil war in Syria is far from coming to an end. The international news talks less about the ongoing conflict in Yemen, but it is clear that every day many lives are claimed and among them, thousands of children seem to be the primary victims of these unstoppable conflicts.

It is a political game between Moscow and Washington, that seem to have divergent visions, ideas, and plans on preserving the already weakened ceasefire as others actors might have been implicated at the time the UN convoys were hit, killing more than 20 people. Washington blames Russia for the bombing and Russia blames Washington for accusing them. It is a dangerous political game that can escalate further the civil war conflict and hostility. The brokered truce has angered both Moscow and Washington, and President Bashar-al Assad has made the remark that he will retake the entire city of Aleppo and his whole country. Since then, Secretary of State John Kerry is asking to hold all flights, all strikes, and try to make the city of Aleppo a no-fly zone to avert any further fights that could enter areas where UN convoys scramble to deliver foreign aids.

From Reuters, “German Foreign Minister Frank-Walter Steinmeier called for a temporary halt to all military flights: ‘If the ceasefire is to stand any chance, the only path is a temporary, but complete ban on all military aircraft movement in Syria – for at least three days, better would be seven days,’ Steinmeier said.” At this point, the brokered truce trying to preserve the fragile ceasefire in Syria has been severely damaged, and some say that the civil war in Syria can continue on for years to come. As for now, there is little hope to stop any insurgent fighting as long as terrorists, rebels, and others actors are trying to topple the regime of Bashar-al Assad.