It has been a busy week in Donald land. Well, let’s face it, it has actually been very much like the previous 46 weeks of his administration. Chaos, lies, staff thrown to the wolves, media slammed in politically calculating moves. It harkens back to the days of decades ago. We will have a special point about that later. In the meantime, this episode of As The Donald Turns is entitled “Truths, Lies, and Nixon.”

As The Donald Turns; Truths, Lies, and Nixon

“@realDonaldTrump is the Paycheck President. Learn how the tax bill will put more money in your pocket & how to contact Democrats who are trying to stop it.”

As we say in the political world….oooops. And we already pointed out that this month, hundreds at the Carrier plant in Indiana will be losing their jobs. That means that nearly all the 700 jobs that Donald saved with then-Indiana Governor Mike Pence are all gone. Carrier still gets its massive tax incentives that the unemployed Carrier folks will help for. We’re sure Donald didn’t mean to lie. He just rarely seems to find the truth. 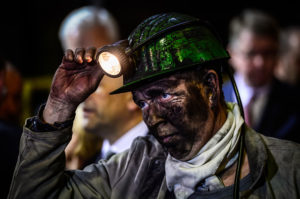 In fact, according to statistics from state attorney general Xavier Becerra, California has more jobs in the solar industry than the entire nation has in coal jobs. You also don’t die from black lung disease in the solar industry, but we digress. Donald has repeatedly brought up this week the idea of “beautiful, clean coal.” Seriously. Coal is inherently ugly, and there is no such thing as clean coal. Maybe when they do the color cartoon briefings for Donald, they can show him what the stuff actually looks like.

“Despite thousands of hours wasted and many millions of dollars spent, the Democrats have been unable to show any collusion with Russia – so now they are moving on to the false accusations and fabricated stories of women who I don’t know and/or have never met. FAKE NEWS!”

You know who agrees with Donald that all this Russia stuff is a waste? Vladimir Putin. He gave a speech this week where he called the allegations against his country, “spy hysteria and nonsense.” He went on to talk about the great turnaround Donald has provided the US economy. You know who appreciated that? Donald. According to CNN, Donald called BFF Vlad Thursday night to thank him for his support.

Thankfully, Donald lawyer Ty Cobb says the Mueller investigation is almost over. He has no facts to back that up, but that’s why he and Donald work so well together.

“Wow, more than 90% of Fake News Media coverage of me is negative, with numerous forced retractions of untrue stories. Hence my use of Social Media, the only way to get the truth out. Much of Mainstream Meadia has become a joke! @foxandfriends”

A few things stand out here. He tagged the folks at the Trump Propaganda Network, (some call it Fox News). He also misspelled media while trashing the media. Here is a thought, maybe the media is just reporting on the “stuff” that comes out of his administration every day. Maybe it is he and his staff that are the negatives, and not the media. His continued assault on those reporting on him, on those who are than stenographers, brings us to our last point.

The similarities with the current administration become stunning, if not with the coverup of misdeeds, then certainly in the way everything is blamed on the media on a near daily basis.

That became even more apparent this week. Now you know the staff here does not go out of its way to endorse other media. But, this week we were introduced to a smart new podcast, which we urge followers to embrace. It is called Slow Burn, and is put together by Leon Neyfakh in conjunction with Slate.com. It takes a look at some of the untold, (yes, there are still some), or under told stories of Watergate. The podcast is quick, it is concise, and the anecdotes and interviews are compelling. Here is an example of something the staff learned this week because of one of the stories:

Steve King is the US Ambassador to the Czech Republic. No, not the repugnant racist congressman from Iowa. This Steve King is a republican fundraiser and activist from Wisconsin. Back in the day, however, he was a bodyguard. He was “hired” by then Nixon ally John Mitchell, to keep his wife, Martha Mitchell, under surveillance and restraint in a California hotel room the day the Watergate burglary went public. Martha knew some of the people involved. Ms. Mitchell liked to talk to the media as much as possible. She was glib, to say the least, particularly after a few cocktails. She was on the phone with journalist Helen Thomas perhaps ready to spill the beans when King ripped the phone out of the wall and then sedated her to keep her quiet while CREEP figured out what to do next.

Yes, that man has moved forward by decades from Nixon to Donald.

Never a dull week around here. Hey, at least we are saying “Merry Christmas” again.