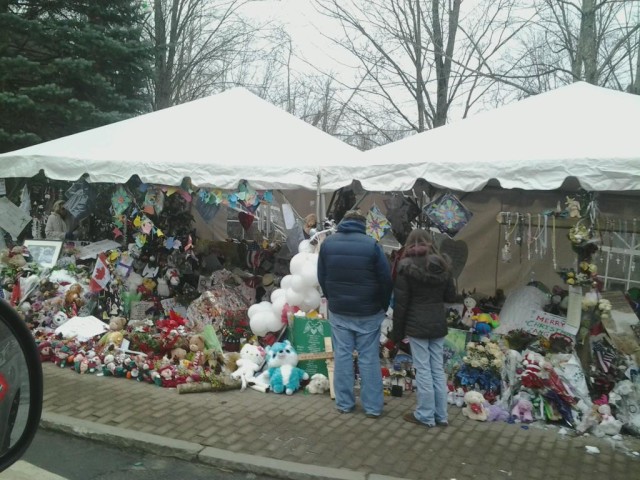 Alex Jones of “The Alex Jones Show” is a right-wing crack-pot that created a following based on fear and conspiracy theories.

Among these conspiracies is that of the Sandy Hook shooting, which took place three years ago today.

The show has called it a staged conspiracy undertaken by the Obama administration in an attempt to “take our guns.”

Right-wing pundits have been largely to blame as a 2013 Fairleigh Dickinson University poll found that 32% of Republicans believed that the actual truth has been withheld in regard to the shooting.

The “truthers” as we call them, believe that the attack was faked as part of a government conspiracy to push stricter gun laws.

However, some conservatives got super twisted and used it as a vehicle to attack gay marriage and separation of church and state.

“..positively reeked of what intelligence operatives I know would call the tell-tale signs of recruitment and conditioning.”

Renew America’s, Austin Miles, echoed this when he suggest the massacre was purposely orchestrated:

“disarm all Americans to retard resistance,[and] brainwash into carrying out such deeds that would prove a point about private gun ownership and the threat to all families as a result.”

Miles also asserted that a witchcraft voodoo unleashed by the government made Lanza kill people.

“Sandy Hook was timed to coincide with the political agenda of the socialist Democrats such as Barry Soetoro [Obama], Chuckie Schumer, and Dianne Feinstein to pass stringent federal gun control laws.”

He also said that the shooting was timed in such a way to coincide with anti-gun agenda.

The conservative radio host compared the conspiracy to what Adolf Hitler did in Germany by “attacking his own Reichstag to start a world war.”

It doesn’t stop there, as the religious right also interjected by claiming that God has taken his hand and protection away from the United States because of gay marriage and abortion rights.

Now THAT is a whole new ball of crazy.

The first comes from “Focus on the Family” founder, James Dobson, who said:

“Believe me, that is going to have consequences too. And a lot of these things are happening around us, and somebody is going to get mad at me for saying what I am about to say right now, but I am going to give you my honest opinion: I think we have turned our back on the Scripture and on God Almighty and I think he has allowed judgment to fall upon us.”

Franklin Graham echoed this when he said:

“Why are we shocked? We shouldn’t be shocked. This is what happens when a society turns its back on God.”

“[a] gracious, merciful, and loving God decided not to intervene to prevent the shooting because it would bring us back to our senses.”

Elliff’s remarks are nothing but twisted and disgusting as he condones the shooting and labels it as God’s will.

It’s similar to thinking that you have to kill so you can be forgiven later.

Then, the gun owners associations thought it best to chime in and give their perspective.

Gun Owners of America director, Larry Pratt, claimed that fears of background checks in turn would lead to genocide.

Pratt then said liberals rejoiced after Sandy Hook, as they:

It’s actually not a surprise that such claims were made by the extreme right-wing; it’s pretty common for them to lack class in situations like these.

They are like toddlers: they yell, scream, and taddle on others, but make no efforts to fix a problem.

They think that if they put it on the back-burner, or let God intervene, that some divine power or nature will end all gun violence.

The most disgusting is that claim that liberals are happy when gun violence occurs because it enables them to introduce new changes to gun legislation.

Gun laws that conservative want no part of.

But it’s only liberals who are taking action to make a change.

Liberals are the only group who don’t believe in letting this problem just sort itself out.