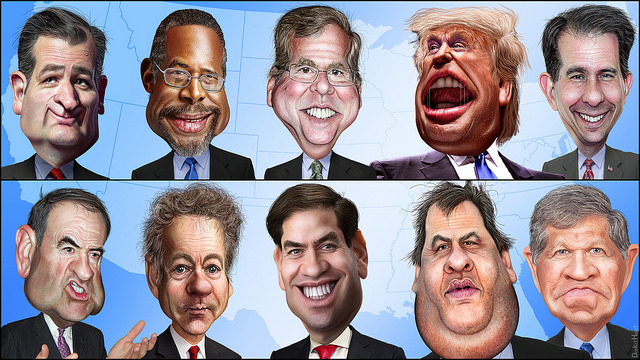 The fifth Republican debate focused on national security, terrorism, immigration, and foreign oil. But now that the debate’s over it’s time to fact check and clean up all the misleading claims made last night.

Bush wrongly claimed that Donald Trump said “ISIS was not our fight”. However, Bush’s comments were barely true at best after Trump said last month that he would “bomb the ____  out of em”. Apparently, Bush misspoke and meant that Trump claimed ISIS was “not a factor”. My reaction is that Bush was trying to save face because he clearly didn’t know what he was talking about.

Cruz wrongly claimed that the immigration bill Marco Rubio cosponsored in 2013 would have allowed the president to admit refugees the U.S. without “any background checks whatsoever.” Cruz’s claims were proved wrong once Mark Hetfield, president and CEO of HIAS said:

“The provision does NOT waive or ease any of the security or other admissibility requirements. So, in fact, it would allow the Department of Homeland Security to focus on security concerns, not whether or not the applicant has a well founded fear of persecution. It makes the process faster and more efficient for designated groups, but not less secure.”

Paul built off Cruz and asserted that Marco Rubio was “for an open border”. However, Paul forgot to mention that the bill that Rubio cosponsored and has since distanced himself from, actually had border security measures set in place to ensure safety. Rand Paul should check his facts before he makes another claim.

Trump hit the stage and made the claim the mother of Syed Farook knew that her son was going to kill 14 people, however, Trump forgot to mention that this claim still is unproven as the investigation goes on. It had been reported by NBC that the mother lived in the same house, but any charges have yet to be brought. It’s another example of Trump jumping the gun.

The headlining fifth Republican presidential debate was surprisingly quiet in comparison to previous debates. But if we take just a few key lessons we can learn that facts need to be checked, especially when it comes to Republican debates.

Image courtesy of DonkeyHotey via a Creative Commons License