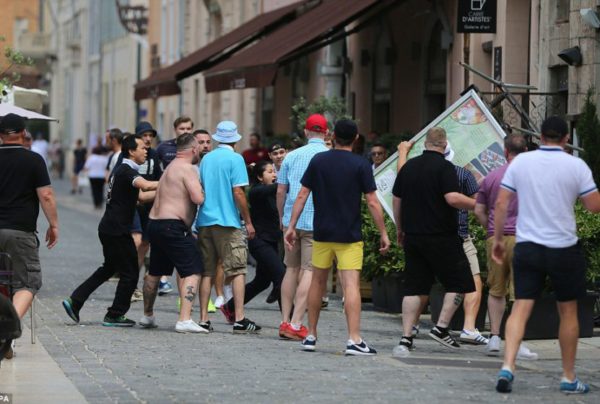 To say that hooliganism is running rampant once again might be a stretch, and is certainly premature. As growing concerns over the past weekend from France have surfaced, there was trouble in Marseille as England prepared to take on Russia—in a football match, not an arms duel. On Friday night, England fans were pictured and filmed throwing “things” —bottles, furniture, the kitchen sink—at French police. Naturally, various people, including Shadow Home Secretary Andy Burnham, were quick to condemn the fans for their level of brutality.

It seems that the fans were not as guilty as some suggested. Those on scene have reported that it was French fans— particularly the Marseille “ultras”—who instigated the violent reaction. TalkSPORT’s Adrian Durham reported that the French fans confronted the English first, which was followed by rounds of tear gas courtesy law enforcers.

Saturday was much the same as England fans were again reported to be clashing with French police, with Gary Lineker describing the events as “sickening”, hinting that that the fans were to blame. Channel 4 posted a video on twitter the caption of which seemed to allege that the England fans were attacking the police without cause.

However, two major videos of the incident have been released which suggest that it was Marseille fans provoking the English fans which caused the trouble. The first is a live report from two fans who were close by; the second is an actual video of the incident.

More recent reports have surfaced suggesting that it was the Russian fans who caused the trouble.

It also seems that the French police tear-gassed the English fans unnecessarily. One fan said that it happened to him despite there being no problems in his area (Warning: coarse language):

The following is a photo of England fans in Marseille. There is little to suggest that there is any fighting going on here:

Suddenly, a row of police, who would later throw tear gas, appears:

And this final picture is of people, some of them not even football fans, running away from tear gas in a narrow street:

Certainly, it seems pretty clear that the English fans were not the only guilty party in this affair. To their credit, most major media outlets have done a good job of reporting things in a balanced manner, and most have made it clear that at least one of the Russian and Marseille fans and the French police acted with undue aggression towards them.

This will not prevent England fans from being blamed by sections of the general public. Whilst it cannot be denied that they have not helped themselves in the past with their actions abroad, that the first reaction to any trouble is to blame them and not wait for the full story to be reported is a problem which must be addressed.

Football hooligans have changed a lot in the past few decades. Although organised gangs of thugs once looked for fights with rival “firms”, there is little organisation about them nowadays. Most “hooligans” are just fans of their clubs or country who get drunk and enjoy themselves before, during and after games. Some still get into the occasional scrap, but very few now go to matches in search of violence.

As BBC Three’s “Football Fight Club” went some way to showing, the small minority of football fans who still look for fights with fans of other clubs are neither organised nor, for the most part, successful in their bid to let off steam. Certainly, they are not a patch on the Russian fans who were in Marseille.

Before the Euros started, some Russian hooligans had already threatened England fans with violence in Marseille. Russian football is still very much marred by violence, with the firms of the country’s major teams treating the fighting like a sport of its own. They did not go back on their word.

Most England fans went to France looking to watch their country play; some got very drunk whilst doing so. There will be people who take objection to both of these, but that is not important in the slightest. What is important is the distinction between their motives and the motives of the Russian fans who went to France looking to “obliterate” the English ones. These were organised groups of thugs who attacked innocent, if badly-behaved, people with the aim of doing great harm.

And what about the French police? Totally content with throwing tear gas at every opportunity, even when it was not even close to being warranted, they failed to act when, at the final whistle in the match itself, the Russia fans stormed into the England section and advanced on the fans, throwing objects at them and causing them to flee in fear.

Unlike at the 2006 World Cup, where England fans behaved like hooligans but without any malice and fighting, the French police did not take any advice from the British police on how to go about things, and it is their mistakes which have caused many of the problems.

Take, for example, what happened in Nice in the build-up to the Poland vs Northern Ireland game. Both sets of fans, who had been praised for the way they enjoyed camaraderie throughout the day, were attacked by French “ultras”, with one of the witnesses alleging that the French police allowed them to walk into the crowd and initiate the carnage which followed.

And yet it is fans who take the blame. The anti-football brigade and people in the sport who love to turn their noses up at hooligans, of which there are plenty, didn’t have it in them to accept that their first reaction of it being “their” fault was wrong and that the travelling supporters were attacked and tear-gassed unprovoked. They don’t want the French police or Russian thugs to get their comeuppance; they only want to see football fans vilified.

English football fans are always going to be seen as vicious hooligans, even if for the most part this is not true, but they are not criminals and they are not the ones who should be blamed for the trouble in Marseille. The stereotypes regarding football fans have been formed not without reason, but they should not form the way we look at cases of violence at sporting events.