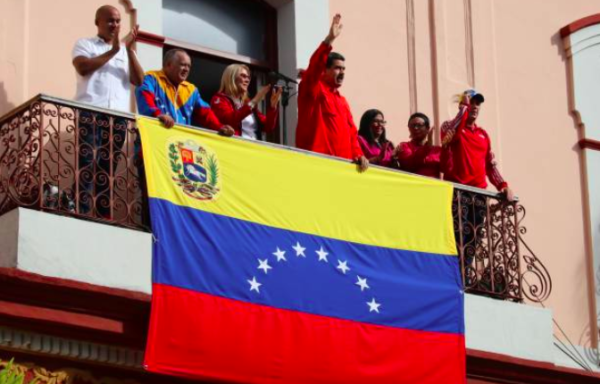 I am a Democratic Socialist. I would consider myself far to the left of center in American politics, but probably not as far left as most Europeans. In my household, my mother insists on watching MSNBC. If I had my preference, I would watch Democracy Now with Amy Goodman. Yeah, I’m THAT GUY.

I love 98 percent of what Democracy Now does, and wish it was a mainstream media outlet with the reach of MSNBC or PBS. Alas, it isn’t that powerful or visible in the American media ecosystem.

I said 98 percent… so what about the other two percent, you might ask?

Well, this is where the global left — in the Middle East, the United States, Europe, and elsewhere — is most consistently and profoundly wrong. I, as a Democratic Socialist, have to own up to this and tell it like it is. If we can’t be honest about our own ideology’s limitations and mistakes, how can we be truth-tellers about other ideologies and factions? We have to be honest with ourselves.

The global left is not — and has not been able to be — honest with itself about Latin America and its constant struggle with United States imperialism and other outside intervening actors or forces.

This is a very sad story because one can easily see — and empathize with — the plight of citizens throughout Latin America. They are the innocents here, the people most deeply affected and wronged by outside interventions and manipulations, often at the hands of the United States. There is no argument — not from me or anyone who identifies as part of the global left — that American imperialism has been a devastating and savage force in Latin America for a very long time. Pick your country, pick your conflict, pick your military junta or coup, pick your CIA-endorsed leader, pick your assassinated or quietly removed opposition figure — the history of American bloodshed in Latin America is lengthy and overwhelming.

The examples are too numerous to count. For most people, the coup which killed and overthrew Chilean President Salvador Allende, replacing him with brutal military dictator Augusto Pinochet, is the most enduring visible example of the nightmare of U.S. interventionist imperialism in the region.

The memories of this and many other such outrageous interventions from the United States rightly makes Latin Americans suspicious, distrustful and hostile toward any new attempt on the part of the U.S. to insert itself into Latin American affairs. Moreover, the U.S. foreign policy apparatus and prominent American political leaders have not shown — broadly viewed over time — any profound willingness to break free of the prevailing and longstanding approach toward the region. This is terrible, and it rightly makes the global left legitimately outraged at the United States.

However… this is where logic begins to crumble among members of the left in America and throughout the world.

Just because the United States is horrible, that doesn’t mean the local leader of a Latin American nation is good when he or she opposes the U.S. or stands up to the American government. It is not that simple. It can’t be that simple — not as a default stance, at least. Sure, there can be good Latin American leaders, but one cannot assume they are noble or enlightened or acting in the best interests of the population simply because they decry the American devils, those Yankee imperialist dogs.

Can we actually judge Latin American leaders on their own merits, and on what they do to their people, not just on what they say?

The global left has long had a hard time crossing this relatively low bar.

Che Guevara was romanticized in “The Motorcycle Diaries.”

He was and still is celebrated on T-shirts that bear his image. He is still viewed as a noble figure, and a man named Hugo Chavez invoked Guevara’s name quite frequently. The two men represent, for many, a heroic revolutionary spirit, but their actions speak quite differently. The misery, oppression, death, and poverty visited upon Cuba and modern Venezuela are and have been overwhelming.

Guevara did not mince words about his attitude, either.

The situation in Venezuela is terrifying and miserable. Violence, instability, and fear are daily realities. The government is outwardly socialist and leftist — meaning that the ideology must take the blame and responsibility for the waywardness of the country; this can’t be seen as a right-wing failure. However, the essence of the government of Chavez’s (illegitimate and/or contested) successor, Nicolas Maduro, is not socialist in practice. It is a kleptocracy.

This thread provides needed context. It does something more, which I will explain below:

Today, Venezuela is in crisis for a lot of reasons. Yes, global capitalist forces have played a role. But if you’re ignoring blatant evidence that this government is a kleptocracy – that these purported socialists are stealing from a starving people – you’re asleep at the wheel.

The essential problem — the enduring blind spot — of a global left which still admires Che Guevara, and thinks of Hugo Chavez as a principled opponent of longstanding American imperialism, is that it falls into a simple trap every time these tensions reemerge in Latin America: It thinks that if a Latin American leader opposes the United States, s/he must be good.

The greatest philanthropist and the worst murderer can share a policy view on a given issue. The most skilled diplomat and the most uneducated common citizen can both arrive at an enlightened and accurate understanding of a geopolitical situation. Supporting or opposing a policy can occur for any of a million different reasons. The idea that a policy stance automatically makes a politician, ideology or party “just like” someone else who sits on the other side of an enormous chasm is supremely wrongheaded.

Responsible journalism, responsible analysis, and responsive everyday political practice on the part of this planet’s citizens all involve the ability to avoid making comparisons between or among political parties or public figures for largely superficial reasons.

Politician A and Politician B might have both made statements which set Twitter ablaze and gained strong reactions from opponents… but does that mean they are “the same” in any meaningful way? One powerful statement could be a profound truth, the other an egregious lie. No responsible person would emphasize the similarity of reactions to the statements. A responsible person would instead note the different motivations and vantage points which defined the two statements.

So it is with Latin American leaders and movements in relationship to the United States.

By all means, the global left should criticize Donald Trump and his administration for butting into Venezuela and raising the possibility of more interventionism and imperialism. The new presence of Jair Bolsonaro in Brazil offers more than a little reason to think that the United States is interested in gaining leverage in Venezuela through Brazil to advance various corporate interests, likely centered around Venezuelan oil. Of course, the United States is up to no good in Latin America.

No one on the left is arguing that the United States is a good actor here.

The blind spot of the global left emerges — as it always does — when it defends Maduro, much as it defended Chavez, going back to Che Guevara many decades before.

If you oppose American imperialism but plunge your population into suffering and visit death or unjust imprisonment upon opponents, you are not a force for good.

The global left — even Democracy Now — can’t get this issue right.

It is the one issue which reliably trips up the left more than any other on the planet. I urge my Democratic Socialist brothers and sisters to reconsider the idea that “the enemy of my enemy is my friend.”

That saying is certainly true on some occasions, often in the more innocent realm of sports competition, but it is rarely true in the always-tortured relationship between Latin America and the United States.

America might be the devil, but Nicolas Maduro is also a purveyor of pure hell.

Opposing Trump or the United States, as though waving a magic wand, doesn’t undo a legacy of brutality, oppression, corruption, and theft.

It’s time for the global left to realize that.