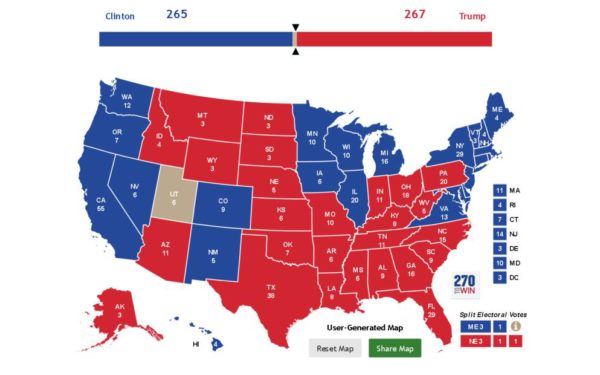 Utah has been in the news regarding which way it will go in the presidential election, an unusual occurrence for a state that has gone red since 1968.

The situation behind this fact leads to a potential case for Hillary to drop out of the presidential race in that state or, more realistically, for her supporters to start acting as if she did.

Some background: Clinton isn’t the main reason for this question about the Utah result. The reason for that is Evan McMullin. (Well, the reason is also connected to the fact that Trump has proven himself so unpalatable to right-leaning Utah that they are willing enough to vote for a person that most Americans are still unaware of.)
McMullin has shown himself to be very surprisingly competitive, but he still looks to be tied for second with Clinton. That is, unless Clinton drops out; it would only take half of her supporter’s switching to push him ahead of Trump.  But why should she do so and why should her supporters consider voting for McMullin? The Electoral College.

For better or worse, the only way to win is to make it to 270 votes in the Electoral College and, for better or for worse, it is nearly impossible for Trump to do this without Utah (or any of the Red states he is currently depending on). Take a look.

(For demonstration purposes, these maps assume that Trump will run the table in Ohio and Florida.)
If Trump runs the table and flips NH, Maine’s congressional district, and Colorado, the map looks like this without Utah:

If Trump runs the table and flips PA, the map looks like this:

In both of these situations, Trump would have massive electoral success only to stop short if Utah flipped. The race would then go to Clinton or go to the House of Representatives, where the state delegations would vote. This brings us back the opening point. Clinton can’t take the state, so why bother competing? Dropping out and encouraging her people could create a national situation where she is the only candidate capable of achieving 270 electoral votes. That said, there are other consequences and realities that complicate this. Her name is set on the ballot and the news of Clinton dropping out in one state would hurt her chances in others. Also, any official statement by the Clinton campaign on this would make the Trump supporters’ accusations that McMullin is a Clinton plant ring true. This doesn’t change the reality of the situation and begs the question: why are Clinton supporters still voting for Clinton in Utah? Is an earnestness and distaste for tricks, ironically similar to what McMullin (and other third-party) supporters will be doing in every other state? A total lack of strategic thinking? Who knows?