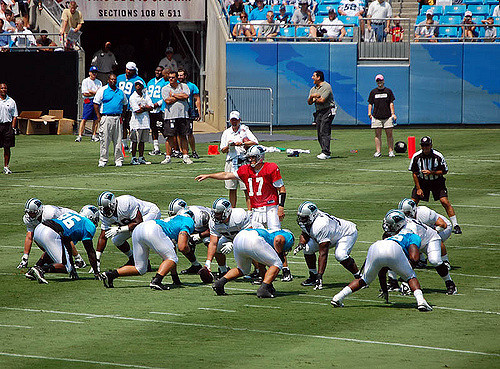 Sunday marks the golden anniversary of the uniquely American phenomena that is the Super Bowl. It is crazy to think that an entire season of football has come and gone, but it has. Seems like just yesterday when Malcolm Butler made the play of a lifetime. Now its time for another player to make his mark on history. The only question is, will it be Peyton Manning riding off into the sunset a champion or Cam Newton capping off a truly prolific year?

The matchup for SB50 at a glance seems to be one-sided. The Panthers, based on their domination of the NFC throughout the playoffs, seem to be the clearcut favorite to hoist Lombardi Trophy come February 7th. However, we must not forget who the opposition is. The Denver Broncos are who they seem to be. Predicated on a defense that relentlessly pursues the opposing quarterback (Just ask Tom Brady about that front 7), the recipe for Super Bowl success hinges upon having an elite defense.

Teams that are built around defense historically have playoff success. Of the previous 49 Super Bowls, 14 of them have been one by the team who finished the regular season with the #1 defense in terms of points allowed. That equates to 28.57% of the winning teams had the best defense that year. This number drops to 18.37% (9 wins) for the team with the second best defense. This past season, Denver ranked 4th in the points allowed category. In that same category, Carolina ranked 6th, only allowing 12 more points than Denver. This matchup bodes well for the Panthers, who also led the league in takeaways with 39.

The defenses will both shine on Sunday, but the Panthers hold the advantage as they will be facing an aged Manning who struggled through the regular season, turning the ball over 18 times in just 10 games. On the other side, the Broncos will be tasked with slowing down the games most explosive player in Cam Newton. Newton has posted MVP caliber stats all year, and will most likely be taking the hardware home with him Saturday night at the NFL Honors.

I believe that there will just be too much Cam for the Broncos to handle in this game. Newton is the most versatile quarterback the Broncos will face this season, and they will struggle to contain him. Newton has experience playing against elite defenses, beating the likes of Seattle (twice), Green Bay, and Arizona (pretty handedly I might add) proves that he has taken that next step to becoming an all-time great. The Panther’s defense is also playing at an elite level this season. They have found a way to play to their strengths and mask their weaknesses, while taking away an offenses ability to produce the kind of points needed to compete with their high-powered offense. I envision Manning struggling to move the ball down field, and the running game being swallowed up before it can get off the ground. The Broncos will fall behind early and pray they can air the ball out 50 times and get a vintage Manning moment to beat the Panthers, but it won’t happen. Peyton is an expired product, their non-existent run game won’t show up, and their defense won’t stop Newton. The Lombardi trophy will be flying first class all the way back to Charlotte come Monday morning.