Shortly after 10:30 AM Eastern, Serena Williams released her now-famous Snapchat picture, showing what appeared to be a baby bump and captioned “20 weeks.” The Snapchat was deleted shortly thereafter, but not before being seen, shared, and screencapped by millions of people. This led, of course, to the instant speculation that Williams is 20 weeks pregnant 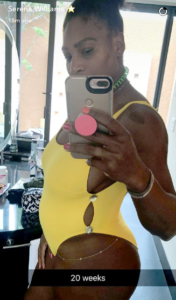 For tennis fans, general celebrity followers, and curious people the world over, this should have led to a day of only speculation. It took almost a full six hours–until about 4:30 PM Eastern–for a spokesperson of the tennis star to confirm with several media outlets that she is indeed pregnant. However, the way media outlets around the world, from tabloids to even those known as being reputable, covered the story shows just how irresponsible popular media can be.

It is well-known that in the internet age, where information can be shared in a matter of seconds, being the first to get a story is often far more important than being accurate. Journalists 20 years ago were lamenting that the rise in 24/7 cable news was forcing outlets to sacrifice accuracy in reporting for speed, and social media has only exacerbated this issue. It stands to reason, then, that news outlets would be talking about Williams’ pregnancy long before she confirmed it, especially given the long gap between the rumor and the confirmation. But looking at how different outlets, especially on social media, presented the story can give us a real insight into the difference between responsible journalism and those with a desire to “break” the story in order to earn those all-important clicks and views.

First, let’s look at an outlet that did things right. The New York Times, as the Snapchat circulated, posted an article wondering if Williams was pregnant when she won the Australian Open. The article began by saying that, “Serena Williams appeared to announce on social media on Wednesday that she is pregnant.” Two sentences later, it adds that the image was deleted and “there was no official confirmation by her representatives.” After the Times’ tennis reporter Christopher Clarey confirmed with a spokesperson that Williams is indeed pregnant, the original article was replaced with a full story on the pregnancy. (The original article can no longer be found on the New York Times’ website, but thanks to the Wayback Machine we can still read it.)

This is a responsible way to report on a social media story. Rumors and innuendo will be considered newsworthy nowadays and media outlets have to report on that. But the New York Times reported that the rumors were just rumors and made that abundantly clear. Then, once they had confirmation, a full story was told, with all of the details included.

Compare that to, say, the Huffington Post. The Huffington Post immediately posted this article, with the large “ALERT” headline in all caps, after seeing nothing but the then-deleted social media post. Similarly, SB Nation gave us the very definitive headline, “Serena Williams just revealed she’s pregnant on Snapchat.” Obviously, these media companies were pretty sure that Williams’ Snapchat image and caption meant she is pregnant–being wrong about this would be horribly humiliating to these outlets–but assuming that that is what the image meant still involved just that, an assumption. Media outlets that people trust–and plenty of people certainly do trust the Huffington Post and SBNation (for sports news, at least)–shouldn’t be making assumptions. They should be dealing in facts and sharing facts–and if they have to make assumptions, they should let us know what those assumptions are.

Even ESPN, the self-branded “Worldwide Leader in Sports” and certainly a trusted source of sports information, got in on jumping the gun on social media. While the outlet’s website did not post an article on the story until it was confirmed by a representative–a truly admirable journalistic practice–the outlet did post about it on Twitter before confirmation. (The tweet was posted by @ESPNW, ESPN’s section mainly about women’s sports, and was retweeted by ESPN’s main Twitter account.)

The GOAT took to Snapchat to announce that she is 20 weeks pregnant. (via @serenawilliams/Snapchat) pic.twitter.com/7O9ub0VWVK

Twitter itself, which has received much criticism over being a platform that spread “fake news” during the 2016 US Election cycle, wasn’t above posting speculation as fact. This description of why “Serena Williams” was trending was still up at 2:56 PM Eastern, long before any confirmation came from the 23-time Grand Slam champion.

Posting assumptions as fact is no small thing, but at least in this case the picture seemed pretty self-explanatory. It was hard to imagine what else the Snapchat image and caption could have possibly meant. (I saw on person guess that maybe she was announcing her wedding date, but that seems pretty unbelievable as 20 weeks from April 19th puts us right in the middle of the US Open). It was an assumption, yes, but a relatively safe one.

That pales in comparison to what numerous outlets did. Not only did they assume that the Snapchat post was announcing Williams’ pregnancy, they also somehow guessed who the father is. Outlets like People and Heavy.com (see image below) pegged the father as Reddit co-founder Alexis Ohanian. Ohanian is Williams’ fiance–they got engaged about 16 weeks ago–but that is still an incredible jump to make from just one picture that says “20 weeks.”

When we see information on the internet, it’s always important to track the sources. Irresponsible media outlets will often state assumptions as fact, while the more responsible outlets will just say over what they know. Even if the assumptions are safe, it’s always important for us to know what those assumptions are and what have been confirmed. Most importantly, though, it’s important to be able to tell which outlets are passing off wild guesses as facts. The baby being Ohanian’s might have been an educated guess, but before the pregnancy was even confirmed there was just no way for anyone (other than Williams, Ohanian, and whoever they shared it with) to know. Media outlets have to be more responsible than that, and it’s up to readers to hold them to that responsibility. Otherwise, what stops them from continued irresponsibility?