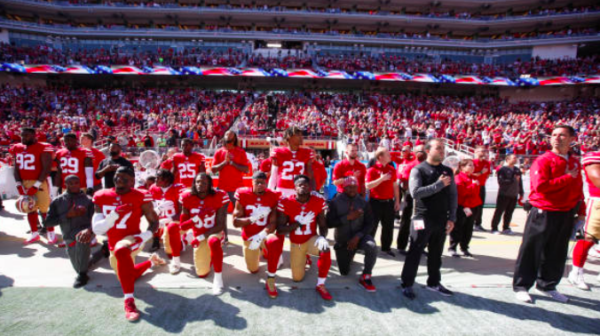 In a shocking move, the NFL announced the implementation of rules to effectively ban protesting during the National Anthem. The rules prohibit players from doing anything that “does not show respect to the Anthem.” It does allow players to stay in the locker room for the Anthem, but also leaves it up to each individual team on how to handle player protests.

The move makes a lot of sense from a business standpoint. Anthem protests have polarized their fanbase, and have garnered criticism in media outlets extending far beyond just sports. The NFL was desperate for a way to quell the negative attention this offseason, and their solution guarantees that anyone who wishes to protest during an NFL game will not be seen.

Out of Sight – Out of Mind

By banning kneeling but allowing for players to stay inside the locker room, all evidence of any type of protest is erased. Sure, players technically can still show their dedication to their cause by not coming out of the locker room during the anthem, but who is going to know?

While the media can snap hundreds of photos of kneeling players, it is much tougher to show the absence of a player on the field. Even if an entire team stays in the locker room during the National Anthem, an empty sideline carries much less power than the image of a single player kneeling.

This appeases sponsors and quells angry fans who felt that protesting players were representing a lack of patriotism on the part of the entire NFL. But this is misguided. Peaceful protests are at the heart of patriotism and are part of what makes America the great country it is.

When it comes down to it, the perceived attack on the American Flag and our troops is really just a misguided attack on NFL players attempting to use their platform to make positive changes in this world.

NFL players did all they could to emphasize that they were kneeling to bring attention to ongoing injustices against minorities in the country. As Colin Kaepernick said, they were using their platform as players to speak up for those who had no voice.

Still, critics would not listen to Kaepernick or any other players’ reasoning. They created their own reasons for the protests. Since the National Anthem is usually done as a tribute to our Armed Forces, a large majority of people believed that the protests were a direct and blatant show of disrespect for our flag and our troops.

-For more details on the origins of the movement, check out my in-depth article.-

Amidst this misunderstanding, many fans threatened to boycott watching and attending NFL games until the NFL banned players from protesting.

President Donald Trump added fuel to the fire by saying in a speech that if a player is seen kneeling during the anthem to “get that son of a bitch off the field.” He later sent out a tweet encouraging a boycott as well:

If NFL fans refuse to go to games until players stop disrespecting our Flag & Country, you will see change take place fast. Fire or suspend!

At that time, only a few players were kneeling. After that though, most NFL players took Trump’s statements as a direct attack against all of them. From there, players held massive, organized protests where entire teams kneeled or locked arms. A few owners, including Jacksonville Jaguars owner Shad Khan, even joined in with his players.

Still, despite it appearing like the majority of the NFL supported players’ rights to protest, there was a quiet, yet powerful minority scrambling to put a stop to the entire movement.

It Was Only a Matter of Time

In a sense, this move proves what many thought all along–the NFL cares more about their viewership and fans than the voices and personalities of their players. Sure, the players are the foundation of the game. Their athletic gifts are what bring fans to the stadium and make people turn on their TVs. But without the fans, they have nothing.

Their biggest fears are empty stadiums, lower television ratings, and losing sponsors. With so many people so vocal about their disdain for protesting players, the big dogs at the top of the league are afraid of losing money. Being so close to the players, they likely are not in the group who simply misunderstands their plight; they just don’t care.

They try to walk the line of siding with their players. They try to appease their stars whose fans also pay big money to see every week. But in the end, they care about their profits. Team owners like Bob McNair and Jerry Jones have quietly expressed their disapproval of players kneeling during the anthem.

In the end, even though there are more players than owners, they know they have more power than the players. With an NFL player’s career outlook being outlandishly short, they are more likely to just fall in line with new rules rather than risking losing a paycheck that can disappear any day.

The Tables Have Turned

The funniest part about all of this is that the NFL must have forgotten just how polarizing this issue is. In an attempt to appease the side against the Anthem protests, they have now angered people who are for it.

#BoycottTheNFL and #TakeAKnee have been trending on Twitter. People now claim they will boycott the NFL because of their decision to ban Anthem protests. The NFL caved to the pressure from some of their big sponsors, and big names like Trump. Now will have to deal with the backlash from those on the opposite side.

But again, the league doesn’t care. #TakeAKnee isn’t actually anything new. It may regain a little bit of steam, but not enough to cause the NFL any worry. Supporters claimed they would boycott the league until Kaepernick was signed to an NFL roster. This was well over a year ago. Now Kaepernick is suing the league for collusion. His decision likely bars him from ever signing with a team again.

The Battle is Far From Over

The NFLPA also issued a statement harshly criticizing, and vowing to fight back against the new rule:

Overall, the NFL should have stuck with their players and attempted to help them in their plight. Instead of attempting to shut away players who want to speak up for a noble cause, the league should work towards helping their critics understand exactly why the players were kneeling. Instead, it took away the only effective platform athletes had for activism.