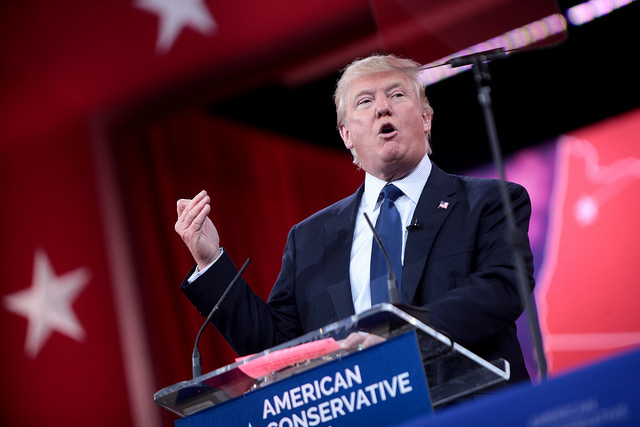 With the growing threat of ISIS, Republican front-runner Donald Trump has spoken out and against the Muslim community, calling for a ban for Muslims entering the United States.

Trump’s call for banishment and containment of Muslim’s  is similar to interment of the Japanese during WWII, As history is bound to repeat, we need to look back to this event in order to prevent it from happening again.
On February 19, 1942, President Franklin D. Roosevelt authorized Executive Order 9066, which resulted in one of the most shameful and embarrassing times in American history: the relocation and deportation of people of Japanese descent living in the United States–the majority of which were American citizens.
According to a document found on trumanlibrary.org, this act of fear and racism put over 100,000 people into internment camps on the West Coast of the United States. And so we can look back into our history to compare what Trump plans are if elected.

Despite this risk of a repeat of history, Trump’s poll numbers are increasing with his outlandish statements, and the state of America’s morality is called into question. If Americans support the banning of Muslims traveling into the United States, who’s to say we wouldn’t also support Muslim internment camps? If Americans are going to buy into this fear and racism-driven, Anti-Muslim rhetoric, I fear the day that a leader like Donald Trump is put into power and implements a plan like Executive Order 9066.

The current situation and growing tensions with ISIS are eerily reminiscent of World War II era America. We are discriminating against and isolating an entire group of people; not for legitimate safety concerns, but rather out of racism, discrimination, and fear. As a country, we can not blame an entire group of people for the wrongdoings of the vocal minority. As a matter of fact, buying into this fear-driven rhetoric is playing directly into the hands of ISIS. Who would want to see a divide in the American people more than the hate cult that wishes death upon the West? If we as Americans have this fear–this terror–of the Muslim community, the terrorists have accomplished their mission.

Image courtesy of Gage Skidmore via a Creative Commons License