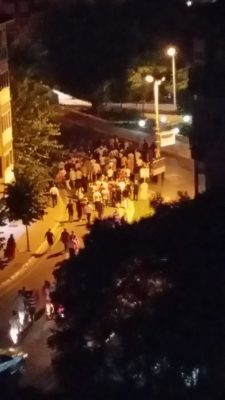 Last Word On Sports Senior Editor Ken Hill is a Canadian living in Istanbul. S/P had a chance to speak with Ken this evening, and here is what he had to say:

S/P: How would you describe how the country is divided. Or is it more segregated to Istanbul?

Ken: “At the moment it’s just a bit overwhelming dealing with so many people and so much information. The country is heavily divided between secularists who are generally anti-government/President Erdogan, and those who support the ruling party. At the moment pro-government protesters appear to have taken to the streets. They are physically fighting the army across the country. Ironically, the police, who brutally cracked down on anti-government protesters just three years ago, are now reportedly on the people’s side.”

S/P: Do you personally feel you are safe? How would you describe the level of panic?

Ken: “I personally feel safe in my home, but earlier this evening I went to the market in an effort to get supplies. My girlfriend and I could hear the chanting of the protesters and see the military jets in the sky. There was a massive queue at the market as people attempted to get supplies. Sirens and calls to prayer from the mosques are constantly echoing around the city, with the occasional boom of a jet. So the level of panic in society appears extremely high.”

S/P: What are you expecting to wake up to in the morning?

Ken: “Just now a firetruck went by, so evidently there are fires burning as well. It’s impossible to say what Turkey can look like in the morning, because as of this moment there is a complete power vacuum. Erdogan was reported to be fleeing the country, so it’s impossible to say what power the government has to restore order, particularly if the army is against them. There’s also the possibility that this event could further consolidate the president’s power. At this point it’s too early to say.

S/P: Being a Canadian citizen, have you, or will you consider the situation a motivating factor to come back to Canada?

Ken: “Returning to Canada with my Turkish girlfriend has been my goal since moving here, however the country has continued to deteriorate since I arrived, now finally descending completely into chaos. Certainly it’s one of the primary motivating factors to leave. This is a sentiment not only shared by me, but a number of my more liberal-minded Turkish friends who have strongly considered leaving the country as things continued to worsen.”

Here is footage taken from his balcony at at 7:00pm EST:

The video clearly highlights the civil unrest sweeping Istanbul, Turkey’s largest city, as well as reports of similar incidents in the capital Ankara and Izmir, in the early hours as a divided country will wake up to the unknown.