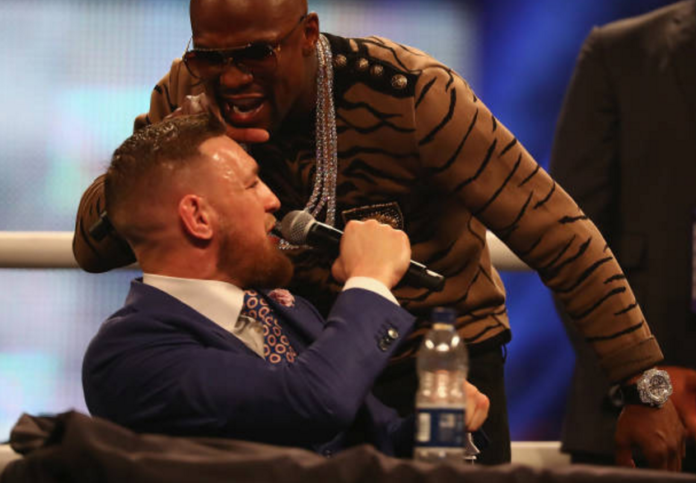 Combat sport in itself is often considered barbaric and senseless. After all, it’s a simple matter of one opponent trying to physically stop his or her competitor by force. Self-defense remains nature’s first law.

More on The Contestants

As names go, these are two of the most polarizing in combat sports. Floyd Mayweather, as a fighter is undefeated at 49-0. Arguably, the greatest pound for pound fighter, Mayweather amassed victories over all the great fighters in his era. Diego Corrales, Arturo Gatti, Oscar De La Hoya, Shane Mosley, Ricky Hatton, Marcos Maidana, Saul “Canelo” Alvarez, Zab Judah, and of course Manny Pacquiao all fell to the “might” of Mayweather. Mayweather’s professional career spans over twenty years. With titles in five separate weight classes, Mayweather is considered by many to be the greatest ever (or least in the conversation).

Conor McGregor‘s history is different. Hailing from Dublin, Ireland, McGregor has zero boxing experience. He fights in the UFC (Ultimate Fighting Championship). McGregor is an accomplished MMA champion. McGregor’s fame began in 2015 when after a victory, he climbed over the cage to confront then champion Jose Aldo, who was seated cage-side. McGregor’s ascent through the UFC was meteoric and colorful. As UFC President Dana White soon realized, McGregor was blessed with the gift of gab. The build up to McGregor fights became legendary. Though McGregor is a champion in his discipline, unlike Mayweather, McGregor tasted defeat on three occasions.

What to make of this fight?

This might be the largest grossing fight in Pay-Per-View (PPV) history. How? Why? For what? Logically it makes absolutely no sense. If one prognosticated from a logical point of view, they will arrive at a singular, undeniable conclusion; Conor McGregor has no chance in a boxing match against Floyd Mayweather. Consider this question, how would McGregor be able to successfully attack Mayweather and hurt him with his punches? After all, McGregor has never fought in a professional boxing match. It will take a lot of Irish luck to give McGregor a puncher’s chance at winning this fight.

However, these men are legends in disciplines where men smack each other for a purse. So it’s safe to say, their audience at large is not the most intellectually advanced in society (though it’s obviously unfair to make assumptions about the entirety of fans of these types of sports). Many believe McGregor has a chance, leading to tweets like this one;

Steven, I believe in my gut and it's telling me mcgregor is gonna win from his quickness, young age and strength

UFC commentator Joe Rogan recently said this on the Joe Rogan Experience podcast. “The way I describe it, how would you expect the greatest figure skater in the world to do playing hockey against Wayne Gretzky? It’s not the same thing. Greatest freak show ever. I’m waiting for that fight more than Canelo Alvarez vs Gennady Golovkin even though that fight is a legitimate fight.”

Former WBC Welterweight champion Victor Ortiz who lost his title to Mayweather in interesting fashion was just as matter of fact in his assessment.

"It's tennis champion vs ping pong champion…McGregor is going to have some trouble." — Victor Ortiz (@VICIOUSortiz) on Mayweather-McGregor pic.twitter.com/KccKuHIZyu

Marketing is the Key

How can one even entertain the possibility of paying money for such a contest? Marketing and branding are the quick and easy answer. Both sports are niche type communities, with fledgling though loyal followings. Mayweather and McGregor each have used this to their advantage on several occasions. Both fighters realized that their persona is a useful tool in their respective arsenals. To further drive this point home, both Mayweather and McGregor chose antagonism and immorality as their chief weapons of choice.

The Birth of Money Mayweather

Mayweather, one may remember, went by the moniker, “Pretty Boy Floyd” in his early days. In a stroke of absolute genius, Mayweather seized control of his career and became his own promoter. He started calling himself “Money” Mayweather. To keep further boost the character, Mayweather actively started promoting a flashy lifestyle. He flaunted his jewelry, vehicles, even his home. What made this move brilliant was the fact that this transformation took place just after the 2008 financial xrisis. While the average American was living “hand to mouth,” Mayweather lived openly lavishly.

Further complicating matters for Mayweather (in a financially good way) was the fact that he (Mayweather) was a domestic abuser. Dating back to a time (2000 or so) when the populous at large showed little concern for domestic violence and athletes, Mayweather had a series of run-ins with law enforcement. These run-ins were due largely to accusations of domestic violence or rather “intimate partner violence” of Josie Harris (the mother of his children). Mayweather faced criticism and ridicule for his perceived actions but remained undeterred. This started a trend of fans and customers, hate-watching Mayweather. In other words, persons started purchasing Per-Per-View viewings of his fights with the hope that Mayweather would lose. Mayweather remained undefeated and became even more of a box-office draw and cash cow.

Return of the Mac

In 1996, British artiste Mark Morrison had a hit single, “Return of the Mack.” One can aptly fit Conor McGregor into this category. Following losses in his career (three of them via submission), McGregor won his return bouts by knockout. He took on two personas, “The Notorious” and “Mystic Mac.” Mystic Mac was an ode to a British psychic astrologer, Mystic Meg. As Mystic Mac, McGregor predicted the outcome of his opponent’s demise.

McGregor stole the show in each of the press conferences he was a part of. A chief example of this was the build up for the Rafael Dos Anjos fight. Below are a few of McGregor’s comments

“Me and Jesus are cool. I’m cool with all the gods. Gods recognize gods.” Said McGregor. “I am out on my own. I am in a league of my own. The game… the game is on its knees. The game must hold seminars every weekend to pay for the training costs, and I’m out here rallying around California in a car that spits fire, dressed like El Chapo, with anacondas on my feet.” He continued, “You can talk about your wins and losses, but at the end of the day you’ve tasted that darkness of being KO’d stiff, and you will taste it again on March 5th.”

As much as most people try to deny it, race and ethnicity play an integral part of everyday life. Though it is mostly latent, it’s always bubbling just below the surface. In combat sport, racism, misogyny, homophobia, and bigotry are used to assist in the promotion of an event. This upcoming fight is no different because its combatants are past masters of this art form.

Remember McGregor once said that Nate Diaz was “a cholo gangster from the hood”. Mayweather’s track record is even more extensive. Mayweather’s uncle and former trainer Roger Mayweather (himself a former boxer) once called himself “the Mexican Assassin” because of the number of knockout victories he had versus Mexican opponents. Roger Mayweather was twice defeated by Mexican legend Julio César Chávez, however. Modern day Mayweather continued in his uncle’s footsteps. Mayweather chose to fight on Mexican holidays (most notably Cinco de Mayo) as a way to maximize profits.

This confluence of events came to a head on the recently concluded four city tour used to promote the Mayweather vs McGregor contest. While Mayweather chose to show his affinity for cash by calling McGregor “a whore,” and made it rain, McGregor was even more reckless. McGregor told Mayweather, “to dance for me, Boy.” Calling an African-American adult a boy is considered as deep a racist insult as there is. However, in true McGregor fashion, he addressed the issue head on. The very next evening, Mayweather addressed the crowd.

This settled that controversy. The entire promotion and production of this bout resemble the script from the comedy, “The Great White Hype.”

Must be the Money

This fight is nothing than a money grab for two entities: the UFC, led by Dana White, and Mayweather Promotions. In the Bible it famously states,

All parties involved have openly confessed a profound love of money and this upcoming event proves that. The expected purses are staggering, though unconfirmed. PPV buys are expected to reach record numbers. Moreover, the price for the PPV also is expected to be a record high for a boxing match.

ESPN’s Dan LeBatard and Bomani Jones cautioned against this event months before the bout was finalized. This is the ultimate spectacle. No matter the outcome, there will be an abundance of complaints. How does this event make sense? Pugilism was once considered a noble sport. How did it deteriorate to such a spectacle? A Boxing legend versus a UFC champion faces off in a boxing match.

That’s more senseless than Michael Phelps racing a Great White shark. Phelps versus the Great White Shark actually happened and was the highest-rated Shark Week special ever. However, fans complained about that event. There is little doubt that fans will be angered by this fight no matter the outcome. Mayweather Promotions and UFC are laughing all the way to the bank.