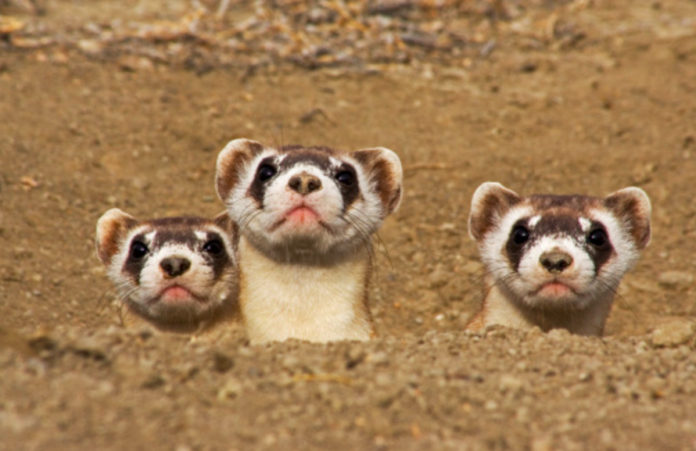 The Black-footed Ferret is one of the best “survival” stories that the earth has to offer when it comes to conservation efforts and the saving of the species. It should be a lesson that saving a population of animals, no matter how diminished it may be, is legitimately possible. The 18-inch weasel, also known as the prairie dog hunter, can be found throughout the mountain west of the United States, including Wyoming, South Dakota, and Arizona, and parts of Mexico. They are the only ferret species native to the continent of North America. The black-footed ferret is a nocturnal and solitary animal they are heavily reliant on prairie dogs as that makes up over 90% of their diet.

The Black-footed Ferret was officially declared extinct in 1979, but a colony of a few dozen individuals were discovered in 1981. Since then, they have been bread in captivity until it was deemed safe enough to begin releasing them back into the wild. By the end of 2016 there were around 300 individuals living in the wild and another 700 in captivity that are still being used to breed and release slowly in the wild to increase the newly established populations.

The biggest issue currently facing the black-footed ferret, indeed this is what pushed them to the brink of extinction in the first place, the dwindling populations of prairie dogs in specific areas. Prairie dogs are considered pests by most Americans and are hunted mercilessly. Not only did the hunting by humans become an issue, but also the establishment of oil refineries across the Midwest. Wyoming, South Dakota, and North Dakota have become the heart of the American oil industry and the controversial extraction process known as fracking. This process is rife with environmental issues, including water pollution, high water consumption and risk of earthquakes. The types of waste from fracking have brought the prairie dog population down drastically from what it used to be. As the Black-footed Ferret’s diet consists almost solely of prairie dog, the loss of food remains their biggest problem.

Another major issue is canine distemper disease, of which there is no cure. Canine distemper is a viral disease that can be transmitted through contact with other animals that are susceptible to the virus. This includes the Black-footed fFerret’s prey, the prairie dog, but also skunks, raccoons, dogs and a number of other species that ferrets have regular contact with.

Since the species was rediscovered in 1981, conservationists have been breeding black-footed ferrets in captivity. In 1987, a black-footed ferret was born; though artificially birthed, this ferret was able to reproduce numerous healthy offspring which at the time was a major scientific breakthrough. Black-footed ferrets were finally re-introduced into the wild in 1997 in Wyoming. Unfortunately, in 1999, sylvatic plague swept through the prairie dog population and all of the ferrets that were reintroduced into the wild perished. In 2003, they were once again reintroduced into the wild and more are released every single year. Since 2013 over 70 ferrets have been released into the wild to create new populations in different locations. To deal with the aforementioned canine distemper, for which there is no cure, scientists have begun to vaccinate all the ferrets that they release, unfortunately all ferrets born in the wild are susceptible to the disease. The Black-footed Ferret is one of the greatest success stories in conservation history and their numbers, once as low as 18, all of whom lived in captivity, now number over 300 in the wild alone. They still face a massive uphill battle, but this type recovery is remarkable.