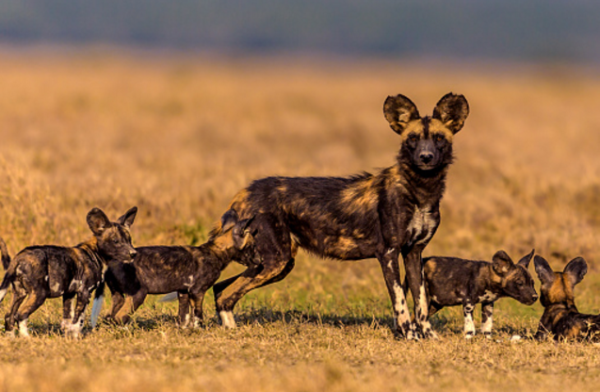 This is a series that will be dedicated to raising awareness about the rapid decline of the earth’s flora and fauna. Each issue will take a close look at a specific species of plant or animal. Dissecting the issues affecting the species; conservation efforts; obstacles conservationists are trying to overcome; and how successful these efforts have been. The world is a beautiful and diverse place. However, humans are going to destroy that diversity. The International Union for Conservation of Nature (IUCN) estimates 46% of the world’s species are threatened, endangered, or already extinct. The human race must act quickly and decisively if they are to reverse the terrible destruction that has occurred to the planet.

The continent of Africa has a number of standout predators; the lion is the “king”, the cheetah is the fastest land animal on the planet, and the hyena is the ultimate scavenger. But, perhaps the most effective killer is the little known African wild dog. Also known as the Cape hunting dog, it lives on plains and sparse woodlands in Sub-Saharan Africa, mostly in Mozambique and Tanzania. This animal should be considered the “wolves” of Africa. Gathering in packs of anywhere from ten to forty individuals, they hunt and live as a unit in a strict social hierarchy, similar to the North American wolf. Expert hunters, they work as a group, similar to wolves and lions, to corner their prey, targeting everything from birds and rodents to larger prey like wildebeests and gazelles. Their numbers have shrunk drastically over the last few decades because of expanding human settlements; they have become susceptible to hunting by farmers, the spread of disease, and competition with other predators over prey.

There are a number of serious issues threatening the 6,600 African wild dogs, most notably the spread of disease, encroachment of humans on their traditional hunting ground, and competition from rival predators. Humans have been expanding onto their traditional hunting grounds for a long period of time; the loss of this land has also introduced a new food source; livestock. This is obviously a problem for local villages who view the canines as pests and will selectively target them. This includes full-on hunting, as well as placing traps around known areas that the African hunting dogs frequent. The later of these can have horrific effects on other species, such as cheetahs and lions, who will share similar hunting ranges.

Another major issue is more microbiological and much deadlier than poaching or competition for food. Diseases such as Canine distemper, for which there is no cure, and rabies can wipe out entire packs of dogs. They are such social animals, and live in such close proximity to one another, that it is likely if one member of the pack is infected, the entire pack will be infected. Dr. Markus Hofmeyr is the veterinarian of Kruger National Park where a number of packs reside and has previously stated, “If one pack is infected it has a 100 percent mortality rate.” These diseases are usually spread by feral dogs living in and around human villages.

Like for many endangered species, the World Wildlife Fund has worked with the 13 nations that the African wild dogs live in to established protected reserves. The Endangered Wildlife Trust’s Carnivore Conservation Programme (CCP) has been working since May 2016 on protecting the species from the multiple diseases that are decimating their population. CCP, combined with the SA National Parks Veterinary Wildlife Services and SAN Parks Honorary Rangers have developed a number of vaccines to protect the African wild dogs. Since May 2016, they have been working in conjunction to vaccinate as many African wild dogs as they can to keep them safe from canine distemper disease. They have also been vaccinating as many feral dogs living in and around the reserves as they are most likely responsible for the spread of the disease. The African wild dog has a fair shot at survival if these veterinaries can keep the remaining 6,600 animals healthy. As the population continues to recover, it will be paramount that the nations that the African wild dogs are indigenous to continue to preserve their natural hunting grounds.