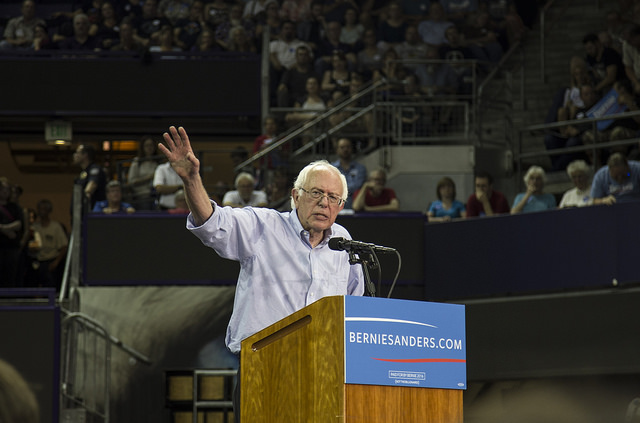 Sanders’ outlook on big banks is a direct opposite of opponent Hillary Clinton, who has Gary Gensler, an 18-year Goldman veteran as a top advisor. Senator Sanders, has called out Hillary Clinton for her involvement on Wall Street and with big banks. Ten years ago over half the people in the nation trusted banks, and now that’s fallen to just 20%. Americans are hard pressed to buy into numbers like that.

That’s why Bernie Sanders what’s to get rid of what he calls:

“greed, fraud, dishonesty and arrogance. These are some of the words that best describe the reality of Wall Street today,”

These words have resonated in the minds of many Americans as Bernie Sanders wants to ensure the taxpayers of America never have to bail out big banks that can’t handle their assets ever again.

Bernie Sanders can make good on his promise by urging lawmakers to reinstitute the Glass-Steagall Act, which would legally once again separate commercial, investment and insurance services. An act that had been in effect from 1933-1999.

Bernie Sanders echoed this by saying:

“greed is not good. In fact the greed of Wall Street and corporate America is destroying the every fabric of our nation”

Senator wholeheartedly believes that this greed is hurting America and its working class and working poor because they are unable to afford basic banking services and that:

“the reality is fraud is the business model on Wall Street. It is not the exception to the rule. It is the rule.”

Senator Sanders and Secretary Clinton are on polar opposite sides because as Sanders has noted, Clinton is deeply ingrained in Wall Street and has been paid millions to speak to big banks. Sanders has called upon history to when Hillary Clinton was a senator from New York in 2008 and voted for the Wall-street bailout called “TARP” which authorized the federal government to provide cash to the nation’s largest banks to prevent them from collapsing financially.

When enough people demand change we get there.