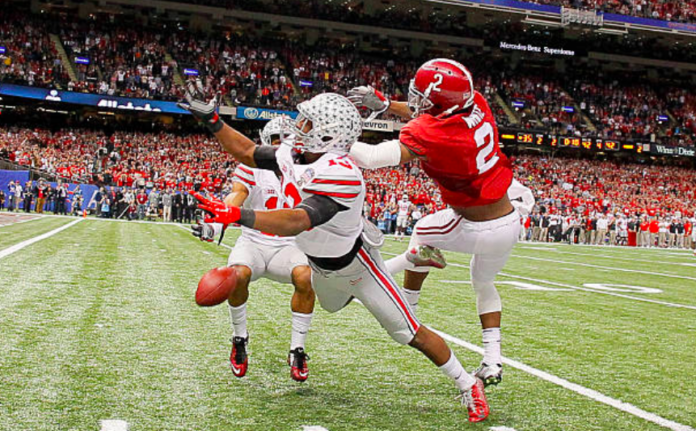 Now that the biggest day of the year is over, Columbus, Ohio and Tuscaloosa, Alabama are both doing city-wide mannequin challenges until tomorrow morning, when ten members of the enlightened 13 decide the fate of both of these teams. Clemson’s AD, Ohio State’s AD and Frank Beamer, whos son is a part of Georgia’s coaching staff, are all not voting on the top six teams.

This is an easy decision to make; Alabama deserves to get in over Ohio State. Lets just break down these teams’ resumes and Alabama’s resume destroys Ohio State’s. I will proceed to destroy the crack-pot myth out there that Ohio State has a “wins” resume “that is so much better” then Alabama’s, because this argument is completely ridiculous.

The only leg up Ohio State has over Alabama is that they have a better record against teams in the top ten, 2-1, while Alabama is 0-1. However, this is misleading because Ohio State never went on the road against a top ten team and Florida State was projected to be a top ten team entering the season, but their quarterback, Deondre Francois, tore his patella tendon, ruining Florida State’s season. After all, it’s not Alabama’s fault Deondre Francois suffered a season-ending injury. On the contrary, Alabama was never given a chance to win a home game or neutral site game against a top-ten team (unless you want to count their win against Florida State.) I get that Ohio State has an advantage in this ONE category, but why just draw the line here and forget about the significance of anything else worth taking into account? Talk about grasping for straws.

How about quality wins?

As the next great college football philosopher, one area of importance for the resume of college football teams is what I like to call “road win creds.” I’ve been the first to point out that Alabama is not a particularly strong road team; however, Alabama clearly takes road-win creds over Ohio State. Ohio State never had a challenging road game even close to the equivalent of Alabama playing Auburn. Hell, they didn’t even have a road game as tough as traveling to Starkville to take on Mississippi State (apparently Iowa was too tough for them). And please, don’t say Michigan; they’ve been atrocious this season, all you need is a quarterback whose arm wasn’t amputated to beat Michigan. In fact, Ohio State doesn’t have one road win against a top 25 team and they never even had to go on the road against a top 25 once. The only Power 5 team Ohio State beat on the road with a winning record is Michigan, while Alabama beat Mississippi State and Texas A&M. Alabama’s road record against Power 5 teams with winning records on the road is 2-1, while Ohio State is 1-1. Moreover, against Power 5 teams with .500 records or better, Alabama is 5-1 while Ohio State is 4-2.

They both cancel each other out in this regard; each of them have three. In fairness to Ohio State, no, I don’t count Fresno State because they’re not a Power 5 school and it’s obvious the enlightened 13 snuck them in at 25 just because it helps Alabama. However, I will count beating Florida State as the equivalent of beating a top 25 team, so therefore, this category is pretty much even between the two. I’ve seen some social media commenters and even some sports commentators make the case that because Florida State’s season dwindled down the drain that Alabama has no business being in the Playoff. This is an absurd argument which lacks context to the situation, which is that the Florida State team Alabama beat was a better team than the Florida State team the rest of college football was fortunate enough to handle.

What about conference championships?

Again, nobody cares about conference championships, just ask Penn State. The conferences are all uneven; the SEC is significantly stronger than the Big Ten this year, it’s not even close. I care about your resume, not whether or not you win your conference. It’s stupid to use broad qualifiers to try to compare apples and oranges. Ohio State and Alabama haven’t played each other and don’t have one common opponent. USC also won their conference, should they also get in over Alabama? Of course not; no logical college football fan would make that argument. It’s also incredibly ironic and hypocritical of Ohio State fans to use this argument considering they used the exact opposite argument last year for getting into the Playoff over Penn State! Also, Penn State beat them head to head and won the same conference they’re playing in. Alabama is in the SEC and completely unrelated to Ohio State. I was on Ohio State’s side last year, but come on Buckeye fans, don’t be a bunch of flaming hypocrites.

To be fair to both teams, so far what I’ve presented probably puts both teams about even in terms of their resumes. From what I’ve written, there’s a logical case that can be made either way, considering Alabama has a better road-win track-record and Ohio State beat two top ten teams. Frankly, the “wins” debate between these two teams can go on for years.

When you bring up the losses category, Ohio State fans either try to change the subject or just evacuate. Seriously, the loss category in this whole debate is why I don’t think there even should be a debate between which one of these teams gets into the playoff. Alabama’s one loss is significantly more forgivable than Ohio State’s two losses. Alabama lost on the road to Auburn by a smaller point margin (12) than the point margin in which Ohio State lost to Oklahoma at HOME (15). Also, it’s worth noting this pesky little fact to Ohio State fans that they lost by 31 points to Iowa. Call me when Alabama lays down and dies like that against a 7-5 team. I love how Ohio State fans are using the “burn the tape” strategy with their loss to Iowa, they might as well pretend it never happened. It’s the same strategy Penn State fans pulled last year when they were left out of the Playoff. The “burn the tape” strategy is never something the committee never buys into and it is quite a ridiculous argument for any college football fan base. What makes college football so great is that every game counts like a playoff game would in any other sport. Why would you try to undermine this by basically discarding the fact that these games even took place? The whole concept of burn the tape just lacks coherent college football logic.

PS: I can’t believe I just spent all this time debating a subject I didn’t even think should be a debate.