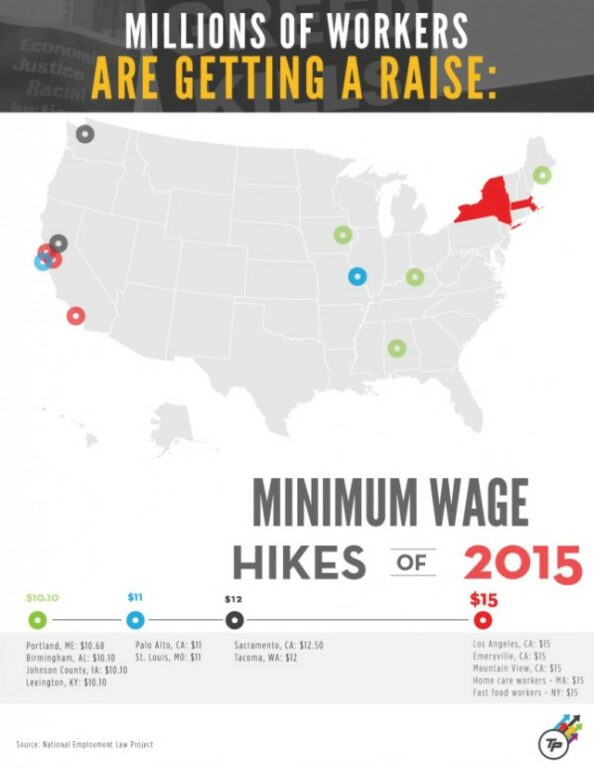 In 2014, many states rallied together for a higher minimum wage than the federal minimum of $7.25 an hour. Now 2015 has become known as rallying cry for a $15 minimum wage which has gained serious legislative traction and led some economists to achieve their goal.

Three cities in the State of California including Emeryville, Los Angeles, and Mountain View have all passed a minimum wage increase that eventually will raise the wage to $15 an hour. All the way across the country in New York, legislation has been enacted to eventually raise minimum wage for its fast food workers to $15. Their neighbors, Massachusetts has been pushing to see home care workers get a similar raise.

We can thank Seattle, Washington and San Francisco, California as they started the $15 minimum trend in 2014.

Having said that, not all cities immediately targeted a $15 an hour wage in 2015. But many states still passed large increases. The city of Sacramento pushed up their wage to $12.50. And Tacoma, Washington raised theirs to $12. Palo Alto and St. Louis increased their wage to $11 an hour. The great city of Portland, Maine kept the ball rolling by increasing their minimum to$10.68.

These numbers are incredible given the fact that in 2012 the highest state minimum wage was only $9 an hour. However, numerous factors such as the Great Recession forcing middle-income earners to low wage jobs and the movement on Wall Street that highlighted income inequality led lawmakers to change their tune.

A $15 minimum wage for fast food workers wasn’t put on the map until the industry’s first strike in New York City in 2012. Since the strikes have spread to 270 cities. This movement reached Walmart workers, home health aides, child care providers, and adjunct professors who have all since taken a stand.

We should definitely look forward to more progress in the new year as active campaigns for a $15 minimum wage in four states have begun. It’s good now that Democrats in the House and Senate has also introduced a bill to bring the country’s minimum wage up to that level and allowed for Democrats to rejoice.

Note for Conservatives: It was actually found that raising the minimum wage has little to no impact on job growth, a major jumping off point for the deep right winged.