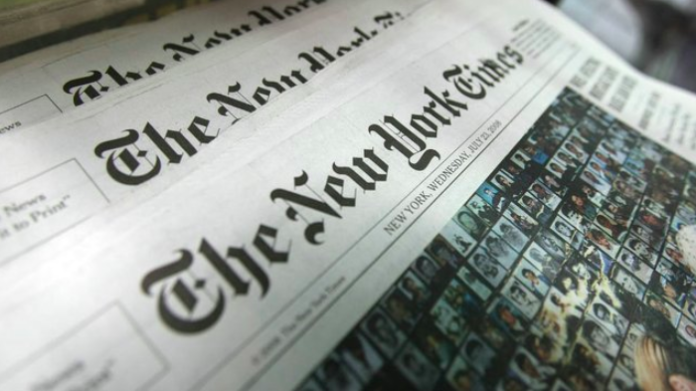 A very fine and specific nuance emerged for me this past weekend in my own evolving attempt to understand American media coverage of politics, economics, and public affairs.

There will be more election analysis in the coming weeks, but as I sat down to write this week’s column, it struck me that media analysis (which I do a lot of) was more important in the present moment, simply because it is too important to ignore in modern political life.

My focus is on the continuing split in the Democratic Party between the center-left DNC coalition belonging to the establishment, and the Democratic Socialists and far-left progressives who are trying to remake the party. The DNC coalition remains supportive of Hillary Clinton, the progressive dissidents representing the Bernie Sanders bloc. The friction between these two groups remains substantial, and at this moment in American Left politics, the proxy fight for Hillary-Bernie has become Nancy Pelosi and Alexandria Ocasio-Cortez.

It is true that Ocasio isn’t “protesting” Pelosi so much as she is bargaining for leverage and pushing Pelosi to move left on climate change. She is trying to shape the agenda and exert pressure on Pelosi. That’s not the same thing as protest — there is some degree of overlap, but the two movements are not the same. The challenge to Pelosi’s place as Speaker of the House is not coming from Ocasio. It is coming from a separate group of House Democrats such as Seth Moulton (Massachusetts). These Democrats are centrists challenging Pelosi from the RIGHT, not the left.

Nevertheless, in most people’s minds — consider this a case of perception being reality — Pelosi and Ocasio symbolize the Clintonian and Sandersian factions of the Democratic Party. Go on Twitter and find various left-leaning political accounts. You will not find it too hard to identify a Clinton-Bernie fight on a weekday. There is a skirmish on some policy question or matter of political intrigue every week. The Clintonian distaste for “Bernie Bros” remains as strong and entrenched as ever, while the Sanders/DSA camp remains fierce in its denouncement of centrist, neoliberal policies from the Democrats in positions of considerable power and influence.

With 2020 soon to become part of our daily political reality in the (not-very) United States, and with 2018 merely setting the stage for a bigger and much more decisive fight two years from now, the split in Democratic Party politics is a very big deal. The extent to which Democrats harness — or squander — the significant increase in political energy during the Trump presidency will have a lot to do with the 2020 outcome and the nature of politics in the next presidential term, regardless of the person who occupies the White House on January 20, 2021. People who consider themselves lefties in an American political context have to make peace to a certain extent with other factions — not a complete detente, perhaps, but enough to focus on consolidating and increasing the gains made in 2018.

With that prelude over, I can now move to the heart of this column: explaining how a better understanding of media can help lefties strengthen their coalition, reduce crossfires and resentments within their ranks, and improve policy across the board.

Here is the starting point for this discussion on understanding media from a lefty viewpoint: I had always thought that the purpose of MSNBC and the New York Times conspicuously — and intentionally — failing to include Ocasio or other similarly progressive stars in their regular content menu was that they aren’t progressive media organizations. They see the world through a more establishment-centric lens and want to maintain corporate support which is threatened by outsiders with views similar to the ones Ocasio (and like-minded people) possess.

That view isn’t necessarily wrong — it is, as far as it goes, an accurate-enough reading of the situation. Corporate money being threatened by outsiders is definitely a central reason why those outsiders don’t get invited (regularly) onto mainstream outlets, whether for TV spots (MSNBC) or op-ed columns (NYT). There’s a reason Eric Swalwell (D-Calif.) and Adam Schiff (D-Calif.) are the Democrats you see all the time on MSNBC: They are not talking about Green New Deals or regulating Wall Street. They will not overturn the military-industrial complex and the sources of money which reside there.

It is true enough that corporate money and the preservation of power and influence are — broadly viewed — the reasons MSNBC and the New York Times structure their content offerings the way they do. Yet, there’s a fine nuance I hadn’t yet grasped until this past weekend, when it hit me right between the eyes.

The New York Times delivered a two-pronged Sunday special in which it propped up an establishment billionaire yet managed to structurally oppose (through David Leonhardt’s piece) cancelling student debt. The paper gave Bloomberg a forum in which to look good for personal philanthropic generosity, yet also shut down the idea that the SYSTEM should try to alleviate injustices. Let’s praise the billionaire here, yet not give readers the idea that systemic change should be recommended. Let’s try to promote individual philanthropy and the principle of expanding opportunity, but not really support the PROCESS or SUBSTANCE of actually giving students more opportunities to pursue an affordable education.

The Times attacked an issue from two flanks — the tactically thorough nature of a coordinated media blitz could not be more transparent.

This isn’t new — it has happened for quite some time — but the nuance which finally emerged for me has to be identified by other progressives who haven’t yet arrived at this epiphany.

That nuance: MSNBC and the NYT — establishment media organs — aren’t merely expressing a policy preference for centrist/moderate/power-friendly approaches to issues when they promote the centrist/neoliberal worldview. It is something more than that.

The promotion of the centrist view and the elimination of the far-left/Democratic Socialist view are calculated attempts to build a weight or accumulation of views sympathetic to the establishment that the far-left coalition will always have to use its more limited independent-media (social media) reach just to keep pace and stay in the conversation.

Phrased differently: This is more than just the expression of a policy preference from establishment media organs. It is a chosen strategy to saturate the media sphere with establishment voices so that a critical mass of far-left views will never be able to outweigh the centrist/moderate view.

Simplified: This isn’t an act of picking Worldview A over Worldview B. This is an act of trying to fill the whole space of political discourse with Worldview A, such that Worldview B isn’t even included at the table.

This is not an attempt to weigh competing political ideas and allow readers or listeners to consider each side and choose between them. This is an attempt to make sure one idea wins — not by testing it against a competing idea, but by shutting out that idea.

This isn’t a case of an NYT editor or MSNBC programming director looking at the political landscape and saying, “Well, there are merits to these competing ideas, but I think this set of views is better than the other.” This is much more severe: It’s a case of those editors and directors saying, essentially, “We can’t allow this newspaper or TV program to ever be considered as a place where competing ideas are weighed. This has to be a place where our worldview flows in and through everything we do, so that people who read us or watch us never get the impression that we might fundamentally support the worldview we don’t want to endorse in any way.”

You will see Chris Hayes occasionally receive the freedom to talk to someone in the far-left coalition on MSNBC in prime time. The network seems to have arrived at a place where it will give him that bread crumb from time to time. Yet, Rachel Maddow is the biggest star at MSNBC, and it cannot be a mere coincidence or accident that she has not interviewed Ocasio on her prime-time show.

It insults one’s intelligence to think that Maddow somehow reviles or loathes Ocasio’s politics and has therefore not chosen to bring her on for an extended interview. Maddow’s life story and her rise to TV prominence reflect the triumph of an outsider on an appreciably large scale. Perhaps one could peg some of Maddow’s personal views as moderate — such as the importance of military force or intervention — but few would say that Rachel is unsympathetic to a solidly progressive interpretation of many issues and policy questions. At the very least, she is one of the last people who would be hostile to Ocasio. She might have strong disagreements (though I would doubt that point), but even if she did, she would give Ocasio a fair hearing and carry on a cordial conversation.

The fact that a Rachel-Ocasio feature interview has not yet happened is not an accident, and if liberals think that it is, they aren’t squaring with the reality that MSNBC and the New York Times are very carefully and intentionally managed at levels above the on-air show hosts or the daily in-the-moment reactions to breaking news, especially in the political sphere.

This is not just a policy preference. It is so much deeper — and more intentional — than that. When one realizes that the establishment media outlets in this country are trying to destroy ideas (Democratic Socialism) rather than merely weigh some ideas (moderate policy) over others (from the far left), it becomes apparent that establishment media is trying to maintain the Clintonite base over and against the Bernie wing.

That is what’s happening underneath the surface.

These two coalitions need to realize this and adjust accordingly before 2020.

Otherwise, the establishment will win again.