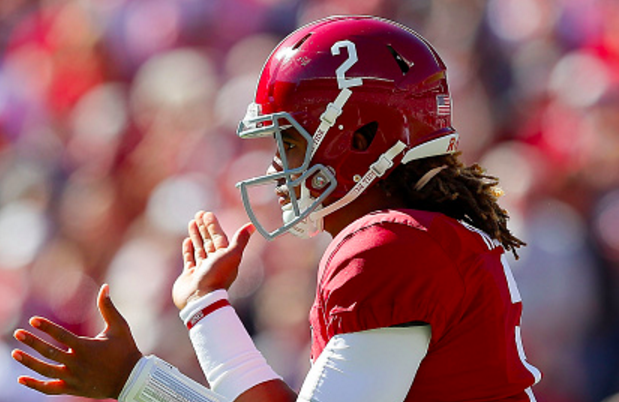 This college football predictions post is also hosted on our sister site, LastWordOnCollegefootball.com

There are only two ranked battles this week, but both are blockbuster matchups–they of course are Alabama-LSU, along with Ohio State-Nebraska. In addition to those, we are also looking at two more SEC battles–Georgia/Kentucky and Florida/Arkansas. As our fifth and final game, we will be predicting a potential surprise in the Big 12, where Kansas State is favored over Oklahoma State. Our experts Steen Kirby, Yesh Ginsburg, John Bava, and Mike Loveall are on hand to offer previews and predictions of all the key games. 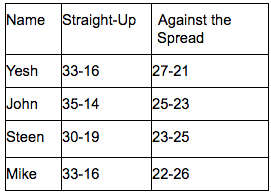 The Machines picks also predicts football games and other sports contests daily. These football betting picks have a proven track record of success. You should see how our analysis stacks up to the professional picks at the Machines picks.

Yesh: Oklahoma State is fresh off a big win over West Virginia, but now has to travel to face Bill Snyder’s team, which suddenly has third place in the Big 12 within reach if it wins its next two games. Kansas State often struggles against Air Raid style offenses, but that’s not really what Oklahoma State has. I think a rowdy home stadium and a bit of a hangover for Oklahoma State leads to an upset here (by rankings, not by the spread). Kansas State 27, Oklahoma State 21

Steen: Not sure why the Wildcats are favored in this one, besides being at home. KSU has lost to the good teams they have played including West Virginia and Oklahoma, and are clearly a step down the Big 12 ladder. Bill Snyder’s underdog squad will make a bowl game, but Oklahoma State is clearly superior on the offensive side of the ball. Four straight wins, including a win over West Virginia, have put the Cowboys into the Big 12 title race and a possible New Year’s Six bowl berth. I don’t see Mason Rudolph and company slipping up now. Oklahoma State 45, Kansas State 28

John: Oklahoma State seems to have recovered well from their controversial early season loss to Central Michigan. They’ve won five of their last six including a 37-20 upset of West Virginia last week. Quarterback Mason Rudolph has been stellar in that span, throwing 13 touchdowns to just one interception.

But Rudolph and the Cowboys offense are in for a challenge in Manhattan this weekend. Kansas State’s defense is among the stingiest in the Big 12 and that’s saying something in a conference not known for exceptional play on that side of the football. Senior defensive lineman Jordan Willis has eight sacks which is tied for eighth best nationally.

Rudolph struggled against a relatively stout Baylor defense in the Pokes only loss in conference play. It’s possible he could be in for more of the same against the ‘Cats. Kansas State 27, Oklahoma State 24

Mike: Oklahoma State continues to under-appreciated after a controversial loss to Central Michigan earlier this season. The Pokes were home underdogs last week against undefeated West Virginia, whom they dispatched by three scores. This week, they travel to Manhattan to face a Kansas State team that lost to the Mountaineers, and hasn’t beaten a Power 5 team by more than six points. Mike Gundy’s teams play best when they have a chip on their shoulder, and being an underdog to a Wildcats team that is struggle to find a rhythm offensively should provide that motivation. Oklahoma State 42, Kansas State 24

Yesh:I really know nothing about Florida. The defense seems good, but it hasn’t done anything against any even half-decent teams. Arkansas put up 30 on Alabama. It shouldn’t have any trouble lighting up Florida’s defense. Arkansas 37, Florida 13

Steen: Despite Arkansas not being ranked, the SEC East is the worst power 5 division in CFB, and I’m not sure Florida is the #11 team in the nation. The Razorbacks are at home after getting shellacked by Auburn, while the Gators come off a rivalry win where they wore down Georgia in Jacksonville. Arkansas is much better than their showing last week against Auburn, while Florida is worse than their current record. It’s tough to pick Arkansas after how bad they got beat last week, but I’m going to anyway. Arkansas 27, Florida 21

Mike: Realistically, for the Gators to win the SEC East all they need is a win over either Arkansas or LSU. Florida has a two-game lead over Kentucky and Tennessee. Arkansas is out of the SEC West race, but still looking to make some noise on the national scene. A little under the radar, Arkansas’ three losses are to three teams ranked first, fourth, and ninth in the CFP rankings. Meanwhile, Florida’s best win of the season is either Kentucky or Vanderbilt. That’s not a strong statement. Their loss to Tennessee doesn’t give them much credibility right now, either. Key here will be whether Arkansas’ offensive line can protect Austin Allen against a great Florida defensive front. If so, Arkansas will win this game. Arkansas 27, Florida 24

John: Florida head coach Jim McElwain has always been known for being a great offensive mind. But it’s his defense that has his team in line for its second straight SEC East title. With the exception of their loss to Tennessee, the Gators have yet to concede more than 14 points in any of their previous seven games.

That unit’s in for a challenge against Arkansas’ prolific offense led by quarterback Austin Allen. The Fayetteville native is averaging 256 yards per game which is third best in the SEC. He also has the conference’s second-highest quarterback rating (149.58) among quarterbacks who’ve appeared in at least 75 percent of his team’s games.

If the Hogs can protect Allen, they have a shot at an upset. The problem is they’re second worst in the SEC in sacks allowed (21). Ultimately, that hurts them against UF. Florida 31, Arkansas 24

Yesh:Georgia faces Kentucky, which sits in second place in the SEC East. How did it come to this? Tennessee has collapsed and Georgia is nowhere near as good as expected this season. Still, Kentucky is not a good team. A front-loaded division schedule, along with a cross-division game against Mississippi State, has put Kentucky in this position. But the Wildcats are not a particularly good team and are far less talented than Georgia. A Kentucky win here would put Kirby Smart on a very hot seat very early in his tenure. Georgia 41, Kentucky 17

Steen: Kentucky started 0-2 after losses to Southern Miss and the aforementioned Florida Gators. Mark Stoops was on the hot seat, and it already looked time for Big Blue Nation to look towards basketball season. The Wildcats have turned things around in a huge way though, scoring four SEC wins to move to second place in the weak SEC East division. Georgia and Tennessee remain on their conference slate, and both teams are in a freefall. If the Wildcats win out, they could be in the SEC title game.

Georgia is still breaking in young players, and they have taken their licks this season. After a strong 3-0 start the Bulldogs are just 1-4 in their last five and traveling to Lexington isn’t going to help. Georgia has lost three games this year when held under three scores. Mark Stoops specialty is defense, and unless UGA finds an answer, Kentucky will eke this out. Kentucky 21, Georgia 17

John: This matchup is intriguing in that Kentucky is a half game behind Florida for the SEC East lead. It would’ve been hard to believe the Wildcats would be in that situation after a week one loss to Southern Miss followed by a blowout defeat against Florida. But they’re now on a three-game winning streak and come into this game riding a lot of momentum.

Georgia, on the other hand, appear to be flailing at this point. They’ve dropped four of their last five including a 24-10 loss to Florida in Jacksonville last week. The honeymoon is officially over for first year head coach Kirby Smart, who faces a must win in Lexington.

Kentucky will be looking for just their third win since 1997 against the Bulldogs. Georgia will prevent it if they can get their run game energized after a dismal performance against the Gators. Georgia 24, Kentucky 20

Mike: The most intriguing game of the week. After a slow start to the season, Kentucky has found their rhythm and sit in second place in the SEC East and one win away from Bowl eligibility. With FCS Austin Peay still on the schedule, there is no real pressure on Kentucky. The offense will play loose. Meanwhile, Georgia, after parting ways with Mark “10 wins” Richt in the off-season, finds themselves at 4-4 and 9th ranked Auburn coming up next week. If Georgia can’t win against Kentucky, their bowl eligibility will most likely come down to a rivalry week match-up with Georgia Tech. Added to this pressure is the reported meeting between Nick Chubb and Sony Michel and offensive coordinator Jim Cheney this week. While all the momentum favors the Wildcats, the talent and match-up favor the Bulldogs. Georgia 31, Kentucky 28