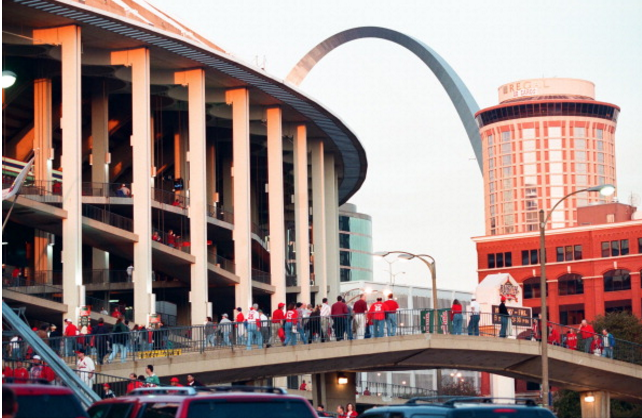 The St. Louis Cardinals and Cordish Companies have announced the initiation of the second phase of their Ballpark Village project for downtown St. Louis. While the construction project itself looks to be a benefit for the city, the long term effects could prove further detrimental to a metropolitan area already in turmoil.

There’s little argument that the construction of the mixed-use development will create jobs, and the Cardinals are even continuing their efforts to ensure that those jobs get distributed with diversity in mind.

The St. Louis Agency on Training and Employment was heavily involved in the decisions of which contractors to use for the first development of the Ballpark Village, and it appears that partnership will be increased with the agency maintaining an office on the construction site. In so doing, the chance for ethnic minorities and women to get a cut of the revenue created by the new construction is enhanced.

After the construction is completed, however, the efforts to ensure that everyone has an equal chance to reap the rewards stop. In St. Louis, that could be problematic.

A Long History of Systematic Segregation

The greater St. Louis area is already one of the most racially-segregated metropolitan regions in the United States of America. St. Louis County’s racial struggles came to light during the riots in Ferguson, but the roots go back much further than that.

According to city data, neighborhoods north of Delmar Blvd. are 95 percent black. South of that “barrier,” the racial demographic is two-thirds white. Additionally, the median income south of Delmar is about $25,000 higher than north of Delmar.

The current downtown area, where the Ballpark Village and its future expansion dwell, originally was where the African-American population centered directly following the American Civil War, according to an Al-Jazeera America report. It was small, however, representing just six percent of the total population. That’s to be expected for that demographic in Missouri at the time, a state that until the passage of the 13th Amendment was a slave state.

After the passage of the 13th, former slaves migrated north in massive numbers, seeking job opportunities and to rid themselves of the communities that served as reminders of their former bondage. The city responded by passing a discrimination ordinance in 1916 by public referendum – by a three to one margin – which barred blacks from moving in to any neighborhood that was 75 percent white.

The Supreme Court of the United States deemed the ordinance unconstitutional in the following year, but that ruling gave birth to a much more devious method of discrimination: housing covenants.

St. Louis County homeowners agreed among themselves not to sell to black buyers en masse, and it was a further 31 years before the SCOTUS again had to intervene and make such arrangements illegal. Once again, all that did was force the segregationists to get more creative.

Whites moved out of the city to the suburbs, and installed zoning restrictions in their new neighborhoods that required large, single-family lots that blacks would be unlikely to afford. They took their businesses, jobs, and economic impact with them. Banks, contractors, and real estate agents adjusted their business strategies in response to the “white flight.”

When the city began to suffer the effects of “white flight,” a well-intentioned but further damaging “solution” was undertaken. The Pruitt-Igoe housing development, completed in 1956, was intended to give blacks and poor whites better living conditions than the slums of the inner city.

The good intentions were quickly sacrificed to the god of greed, however. Contractors inflated their bids, knowing that they had all the leverage in the situation. To meet rising costs, the developers sacrificed amenities and made the dwelling units smaller. Before the development was demolished in 1972, all it had accomplished was effectively establishing a “racial barrier.” That barrier is now seen in the maps of St. Louis County’s racial demographics.

How the Systematic Segregation Survives Today

Now Cordish and the Cardinals are expanding their dominion in downtown, and while it appears that their intentions may be as noble as the city’s were in the Pruitt-Igoe development, the actual effects could be just as harmful as the effects of Pruitt-Igoe.

The first phase of the Ballpark Village was blamed for existing establishments either moving out of downtown or going out of business. There are concerns about the practicality of the office space as well, as demand for that type of facility in downtown has been so low that no such structure has been erected since 1989.

The permanent jobs created in the development’s new entertainment, restaurant, and retail spaces won’t offer downtown residents a huge increase in their upward economic mobility. The vast majority of these jobs will pay little if anything over the minimum wage. At the same time, options for where these people can spend their small amount of discretionary income could decline.

Part of the financing for the new development will come from a sales tax increase of 1% within the Ballpark Village’s boundaries, or right where many of the newly-employed people will be living their lives.

The Landscape of the Ballpark Village

What has been created in the Ballpark Village, and will now expand, is a place where middle- and upper-class whites can come in from the suburbs, be served by people less affluent than them at a variety of establishments–all owned by the Cardinals and managed by Cordish–and then return to their large, single-family residential developments.

Meanwhile, more locally-owned businesses in downtown without the allure of the connection to the Cardinals will see their traffic drop to the point where the location is more of a liability than an opportunity. The former employees of these businesses, many of whom would lack the funds to relocate, could find themselves with no other choice but to go to work for the Ballpark Village.

On top of that, there’s the dress code that is effective in all Cordish properties, which has been widely criticized as racially discriminatory. The area in which that dress code will now be in effect is over five times larger, effectively acting as a curfew for people in their own neighborhoods.

The message sent from white suburbia to black inner city is that we are building our amusement park in your back yard. We will let you build it for us, then staff it and partially finance it, but we aren’t going to let you detract from our experience or share in the spoils. After we’ve had our fun, we’ll return to our lives and leave you to deal with the real-life effects of our merriment.