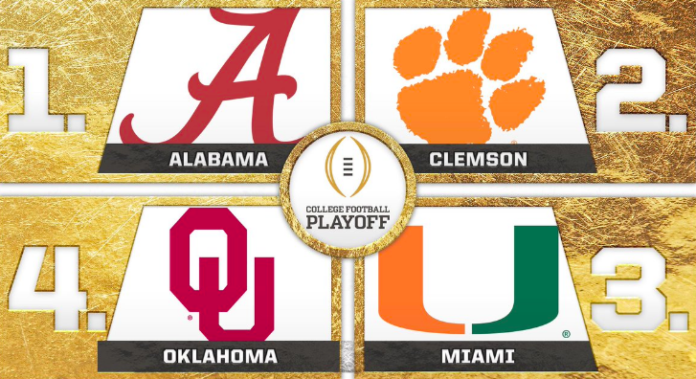 Last Tuesday’s Playoff rankings were the easiest decisions the committee has ever had to make. Everybody and their moms all knew by the time they all downed their last glass of wine Saturday night that these four teams would be who is in the final four for now. I’m not saying the exact seeding is right, but who’s in, who’s out, who’s in the top seven, who’s in the top ten, and who’s out of the top ten was predictable to anybody familiar with the committee and mostly agreeable by the standards of most college football fans.

I’ve often heard people say “A win’s a win, and a loss is a loss.” This statement is true in professional sports, but definitely not in college football. If Georgia lost to Auburn by a game-winning field goal, they’d at least be at the five spot, if not in the top four. Going on the road against one of the best home teams in college football and losing by a sliver isn’t the end of the world. Georgia didn’t drop to the #7 spot because they lost, they dropped to #7 because they got blown out by 23 points. There’s a difference between a misdemeanor and a felony. Perspective and nuance matter in life. Whether it’s history, parenting, politics, literature, poetry, or most of all, college football. Knowledgeable college football fans all have it. College Football psychos and clueless fan-boys don’t. Sometimes I doubt it, but I tend to believe that the the committee is full of people who are knowledgeable about college football. If Miami loses by a field goal to Clemson, they will probably still be in the playoff. If they lose by three touchdowns, that’s a different story.

Auburn going on the road and losing to Clemson has nothing to do with why Alabama should be ranked ahead of them in the rankings. Alabama never goes on the road in the non-conference, so I won’t hold that against Auburn. Auburn just has a bad loss to LSU, which never should’ve happened, but it’s forgivable just like Oklahoma’s loss to Iowa State and Georgia’s loss to Auburn. Nothing makes me tear my hair out more than when college football psychos obsess over record in college football without regarding any sense of CONTEXT to these wins and losses. In professional sports, all this sorts itself out, it’s just how the system works. In college football, we have all sorts of fan-boys, who go to battle for their teams first, and their conference second, and psychos who get paralyzed by records. In case you didn’t know this, teams control 1/3 to 1/4 of their own schedule, depending on conference. Therefore, strength of non-conference schedule matters and the committee sent that message Tuesday night, at least for the most part.

Despite the Potential the Committee had to Make Worse decisions, They’re Still a Bit Too Obsessed With Record

This really has to do with the fact that Wisconsin is ranked ahead of Auburn and Georgia. No, I don’t care if Wisconsin is undefeated any more than I care what brand of underwear Alex Hornibrook wears. Contrary to popular belief, I don’t get all googley eyed by teams that are undefeated. Their schedule hasn’t been strong enough. Case closed. If they win out against Harbaugh and Urban, then they’re in, no questions asked. But the chances of this happening are “a million to one, doc.” If a college football miracle takes place and Wisconsin ends up winning out, they’ll get in the Playoff, no questions asked.

BUT, beating Northwestern at home can’t be your best win of the season so far. Sorry Paul and Alex, not good enough. I’m all about risk-taking and heavy lifting. Go to the crap table and put down $200 instead of just putting nickels in the slot machine every time you to go Vegas. Put down the 20-pound dumbbells and pick up the 40-pound dumbbells for once. This is just my philosophy on life, which is why it is also my philosophy on college football. Georgia and Auburn both slammed $200 on the table and picked up 50-pound dumbbells. They both decided to go on the road in the non-conference against top football programs in the country. That’s what I’m talking about! Wisconsin beat BYU in the non-conference. For all you kids out there, model your life after Georgia and Auburn, not Wisconsin. Georgia going on the road and beating Notre Dame and Auburn blowing Georgia’s doors off are both more important than the fact that The Cheese Heads are still undefeated.

Clemson never should’ve been ranked #2. This is crazy. The fact that Clemson is ranked ahead of Miami, who is undefeated and has non-conference creds every bit as favorable, if not better, and Oklahoma who went on the road and beat Ohio State by fifteen points is a bit absurd. This has to do with group-think and geographical discrimination. AND Clemson losing to F***ING Syracuse while the U is still undefeated, the committee still feel the need to display their allegiance to Clemson, like it’s a part of their contract or something. I get that Kelly Bryant got injured and it’s still forgivable as long as they win out, but losing to Syracuse is like losing to a school for the deaf and the blind if you’re one of the top football programs in the country. This led to my theory on Clemson being ranked at the #2 spot as a result of the group-think hangover. By definition: group-think hangover is a specific type of groupthink amongst the enlightened 13 that gives favorable treatment to a specific team as a result of said team’s success in the previous season. It’s a term I just invented on the spot, call me when it makes the dictionary. There’s no other explanation, I don’t see any case they can make for Clemson being ranked ahead of Miami. If Clemson beats Miami, I’ll put my hands up, but for now, this is absurd.

The committee tend to be traditionalists who tend to favor teams East of the Mississippi more than teams West of the Mississippi. I get it, teams East of the Mississippi tend to be better. The Big 12 and Pac 12 both play lousy defense and they haven’t proven themselves in the past few years. BUT this isn’t always the case of which team is the best or most deserving, and this year, the tides have turned. It’s how sports work, teams go up and down the totem pole; college football isn’t a caste system, guys. Also, Oklahoma will have a shot to prove the committee right by losing to TCU in the conference championship, which actually wouldn’t shock me. Big 12 games are high scoring, shaky, and remind me of NBA playoff games. Also, Lincoln Riley is a young head coach, who knows what could happen? I hope blood pressure levels in Norman, Oklahoma stay under control for the next couple of weeks. It probably won’t make a difference for Oklahoma, Miami, or Clemson, but it goes to show that the enlightened 13 is willing to give the benefit of the doubt to Clemson before Oklahoma and Miami, which is quite stupid. For now, Oklahoma should be at the #3 spot, ahead of Clemson and behind Miami. Stop hero-worshipping Dabo Swinney. I like Dabo too, but he’s not the messiah, he actually puts his pants on one leg at a time and has the same bowel movements as the rest of us.

What Will Likely Happen?

You know what they say, the best way to predict the future is based on the past. Based on this train of thought, it’s impossible at this point for Alabama to not make the Playoff. They will probably go on the road and lose to Auburn in a one possession game. Alabama isn’t a good enough road team to beat Auburn, and Auburn doesn’t lose at home. First, whenever Gus Malzahn has had a good team, Auburn has given Alabama trouble. In 2014, Alabama won 55-44 in Tuscaloosa. That year, Auburn went 4-4 in the SEC. Now, they’re an offensive juggernaut who hasn’t lost at home and only lost one game in the SEC. Alabama barely beat Mississippi State on the road. Look at their road game wins. They’re just not good enough on the road to stop the Gus Bus.

Sure, you can hold it against Auburn that they lost to LSU, but that’s just one loss against an inferior team. It happens, it’s the nature of the beast. Just ask Oklahoma, Clemson, and Ohio State. Also, this will be a close one-possession game because the last time Alabama lost a two possession game was to Oklahoma in the 2014 Sugar Bowl. Just about every college football coach has at least one BAD loss in a given season, except Nick Saban. He’s just immune to that “sorta stuff.” Alabama losing one close game in Auburn wouldn’t keep them out, not even close. The Tide will continue to roll, and no, I’m not talking about the laundry detergent. It would mean absolutely nothing, no team in college football would have it better in the “losses” category, unless of course, the U, if they go undefeated.

I know how the committee thinks. They put too much weight into win-loss record. If it all comes down to one-loss Miami, one-loss Alabama, one-loss Clemson, one-loss Oklahoma and two-loss Auburn, they’ll leave out Auburn. It’s not necessarily the right decision, but I know the committee and their philosophy. Another questions is what happens if Georgia and Oklahoma both win out and Wisconsin loses? Then it will be Alabama, Georgia, Oklahoma, and the winner of the Clemson-Miami game. If Miami loses a close game to Clemson they’d really be getting screwed, but when it comes to two potential Playoff teams playing a neutral site game in a conference championship, they’re inclined to take one of them, not both.

I’ve heard some Ohio State fans cross their fingers and hope for a playoff spot. This won’t happen, it’s not even possible. Even if Oklahoma loses again, they couldn’t even beat out Oklahoma if they lose, a scenario in which Oklahoma wouldn’t even be in the playoff. UNLESS they blow out Michigan and Wisconsin 59-0, Oklahoma and Clemson both lose, Alabama wins out and Miami gets blown out by Clemson or loses twice. I hate to break it to you Buckeye fans, but even one of these happening would have to be in the movies. FOH Buckeye fan-boys. I’m a big Urban Meyer guy, I love him as a football coach, but he won’t be in the Playoff this year. Buckeye fans, go produce your own film about the 2017 Ohio State Buckeyes called “What Could’ve Been.”