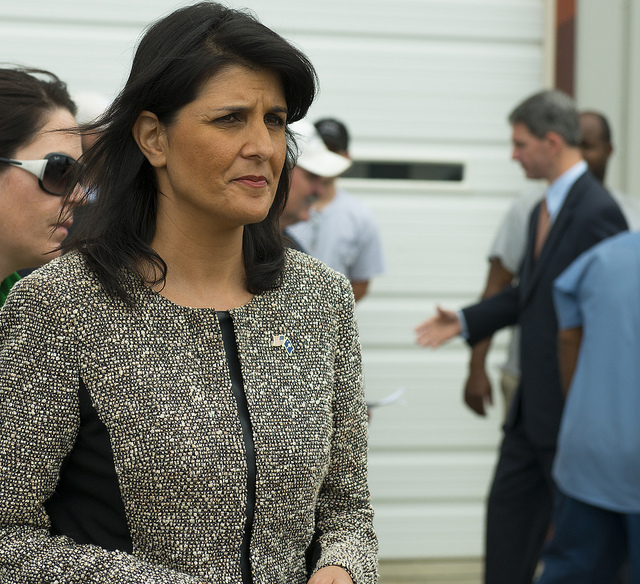 U.S. Senator Marco Rubio was awarded the coveted endorsement in South Carolina when Gov. Nikki Haley announced her support at a rally on Wednesday.

Nikki Haley, the most popular GOP politician in the state has decided to keep things the way they are by backing the establishment candidate best suited to fight Donald Trump and Ted Cruz.

The former Governor of Florida Jeb Bush was originally thought to be the front runner for endorsement as the pair share similar views on education. In addition, Bush helped Haley raise money for her successful re-election bid in 2014.

Unfortunately, the voters thought otherwise as Bush has tumbled to fifth place out of a possible six in the GOP field. Meanwhile, Marco Rubio is sitting comfortably in third place.

Haley’s decision is a bit of surprise given that on Tuesday the governor said she had yet to make up her mind on who to back for the upcoming election.

Back in 2012, she endorsed eventual Republican nominee Mitt Romney. However, her backing still led Romney to fall in the South Carolina race to former U.S. House Speaker Newt Gingrich. Gingrich’s win broke a three-decade long streak of of voting for the candidate who needed up on the November ballot.

Haley is apparently on the shortlist of vice presidential short lists because of her handling of last years Charleston shooting as well as the removal of the Confederate flag from the state house. Last month she gave the Republican response to Barack Obama’s final State of the Union address.

Nikki Haley choosing the senator is an unusual one because it comes at a crucial time for Rubio.

After finishing in fifth place in the New Hampshire polls, Rubio needs a surge in South Carolina to bring himself back into contention. And with only three days until the primary, Rubio needs to be on the move.

A bright spot for Rubio is that he has had great success in getting financial support in the Gamecock state.

Once such donation came from Hank Scott, the ceo of Allendale lumber company, who at a S.C. GOP dinner in 2012 met Marco Rubio. Scott later donated $200,000 to a PAC for Marco Rubio. To date in this presidential race the donation is the largest from South Carolina.

Haley’s pick of Rubio may not be that unusual because of Nikki Haley’s similar background. Both are 44-year-old children of families who immigrated to the United States. Back in 2010 they were both selected to their current Tea Party seats as well.

Marco Rubio and Nikki Haley have communicated on the campaign trail and the senator has also voiced his support for Nikki Haley being a great vice president candidate.

Nikki Haley is known for being anti-Trump after she called him one of the “angriest voices” in her State of the Union response.

Nikki Haley, the daughter of an Indian immigrant called Trump’s proposal to ban Muslim individuals from entering the United States an absolute embarassment. She even went as far to call him un-American.

Nikki Haley’s relationship with Ted Cruz is rather unknown as her and Cruz have had very limited contact. But like Rubio, Cruz is also the son of a Cuban immigrant.

Apparently, Jeb Bush had pushed so hard for the support of Haley that he had his brother and father, both winners of the South Carolina primary, reach out to Haley.

But alas Bush is lagging far behind in South Carolina and it looks like this round will go to Rubio.