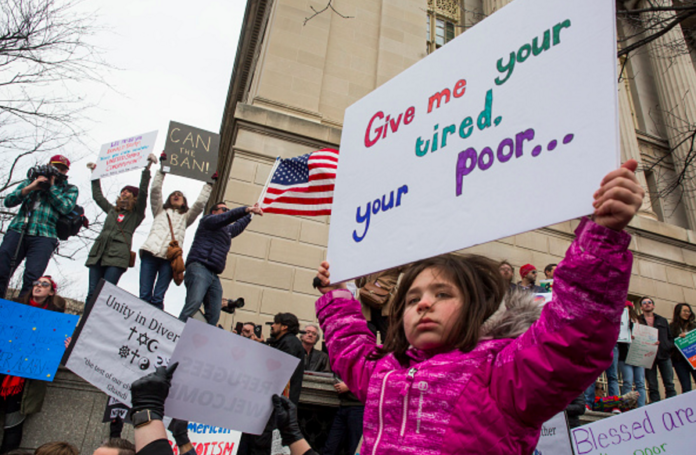 In old Christian parlance, it is often said that the voice of the people is the voice of God. If that be the case then it must be God’s will that the United States of America elected Donald Trump its forty-fifth President. Mr. Trump has been a lightning rod for controversy dating back to his time on the political hustings. Be that as it may, now Mr. Trump is the de facto leader of the free world and has embarked on a mission of change. In his own words, he wants to “Make America Great Again.” To this end, Mr. Trump believes that National Security is at the proverbial tip of the spear.

Flashback to a time gone by

Long before Donald Trump was considered as a genuine candidate for the post of presidency, issues of National Security concerned him. He was scathing in his criticism of then-President Barack Obama’s approach to protecting the nation’s border through dialogue. More importantly Mr. Trump has shown to be xenophobic if not racist at times with respect to members of the Islamic community. In a 2011 interview on Fox News program The O’Reilly Factor, host Bill O’Reilly asked Mr. Trump the following:

O’REILLY: But you do believe overall there is a Muslim problem in the world.

TRUMP: Well, there is a Muslim problem. Absolutely. You just have to turn on your television set.

O’REILLY: And do you think it encompasses all Muslims?

TRUMP: No. And that’s the sad part about life. Because you have fabulous Muslims. I know many Muslims and they’re fabulous people. They’re smart, they’re industrious. They’re great. Unfortunately, at this moment in time, there is a Muslim problem in the world. And by the way, and you know it and it I know it and some people don’t like saying it because they think it’s not politically correct.

O’REILLY: Whoopi and Joy will walk off on me. But when I say there is a Muslim problem in the world I basically say why don’t the good Muslims that I believe outnumber the bad Muslims probably eight or nine to one…

O’REILLY: …why don’t they, the Muslim community throughout the world, speak out more forcefully against the jihadists?

TRUMP: Well, there is something out there that brings a level of hostility that I have never seen in any religion. I mean, you can say what you want about the Koran. You can say what you want, but there’s something there. There is tremendous hatred and tremendous hatred of us. I look at Iraq. I was watching the other day, you know, we have spent all this money and all those lives in Iraq. They hate us. They can’t get rid of us fast enough.

The nation spoke through their ballots and elected him as Commander-in-Chief.

What is the Master Plan?

Throughout his campaign, Mr. Trump spoke of a program which he titled “Extreme Vetting.” In this plan, the concept is to carefully screen all incoming nationals of certain nations across the globe–namely Muslim nations. One can easily mistake this type of action as racism, or this thought process as elitist xenophobia. Of course, it can be called paranoia also.

Now in government, President Trump has put his plan in motion. The plan started small enough, restricting access to citizens from just seven countries. The Maleficent Seven if you will. Iran, Iraq, Libya, Somalia, Sudan, Syria, and Yemen inhabitants were all restricted from entering the United States and her territories. In the eyes of President Trump and his administration, this was not on the same scale of ethnic cleansing or other human rights atrocities. No, it was just a means of protecting this blessed nation from potential harm and destruction. Bear in mind, this genius also proposed the building of a wall as a means of halting illegal immigrants from crossing from Mexico. After all, that’s the only way persons enter the country illegally, isn’t it?

The fallout went as expected

Consequently, as most logical thinking folks would have imagined, this ban became the center of all the world’s news. Barring a select few, the world was up in arms with this form of overt prejudice by an ultra-conservative Caucasian group. There it is, Caucasian. This move was viewed primarily through the prism of racial bias and racism.  Of course when the term racism is used, persons become uncomfortable. To this end, quite a few chose to remain quiet. Or better yet place their proverbial heads in the sand.

Others chose to make their voices heard. Many came out in droves to protest this action by the President and his cronies. In New York City, the taxi drivers’ union stopped working at the airports for a period of time. As a form of mass action, the Bodegas closed for a day all throughout the five boroughs. There were marching and other protest action in many major cities throughout the US.

More famous personalities spoke vociferously against President Trump and his actions. In the sporting community, NBA head coaches Greg Popovich, Steve Kerr, and Stan Van Gundy were at the forefront with their criticism. Radio personalities Bomani Jones and Dan Lebatard of ESPN were measured in their opinions but spoke against it, nonetheless.

President Trump’s business contemporaries such as Warren Buffett spoke out against this. Social media inventor and maestro Mark Zuckerberg was especially critical in his thoughts. For Zuckerberg, this is a personal matter as his great grandparents were immigrants and his wife’s parents are immigrants as well.

In a strange twist of events, President Trump fired the Acting Attorney General Sally Yates in what was dubbed a “Monday Night Massacre.” She was removed because she refused to publicly defend his controversial travel ban. On the face of it, the word “dictator” comes to mind. This is right out of the playbook of King Leopold II, Idi Amin, and Papa Doc. Remember, while on the campaign trail, Candidate Trump promised a cabinet of inclusion and betterment for all. His motto was “Make America Great Again.” Now the nation knows what he meant.

When the New York Taxi Workers Alliance called for protest by all taxi and livery cabs in the city, Uber decided to have its drivers go to the airport to pick up passengers. Whether innocent or not, this was seen as union busting and betrayal. Traditional clients of Uber took to social media to express their displeasure. #deleteUber began. Uber’s President and CEO Travis Kalanick was a member of President Trump’s advisory team. Many felt that Uber was simply ignoring the plight of others and being selfish simply due to Kalanick’s alignment with the President. A few days later, Kalanick in a memo to the company employers announced that he had resigned from the President’s advisory council.

Trump promised that he would have “extreme vetting” once elected, stating it was a necessary step to keep the country safe. When he signed the executive order 17 days ago that took steps toward placing that policy into action. The rest of the nation did not stand idly by. More importantly, the Washington State Attorney General appealed to the Court of Appeals for the 9th Circuit. The ruling did not go in favor of the President’s plan. Here’s an excerpt:

“The Government has taken the position that the President’s decisions about immigration policy, particularly when motivated by national security concerns, are unreviewable, even if those actions potentially contravene constitutional rights and protections. There is no precedent to support this claimed unreviewability, which runs contrary to the fundamental structure of our constitutional democracy.”

President Trump was displeased to say the least. He took to twitter to express his displeasure. Here’s a tweet:

SEE YOU IN COURT, THE SECURITY OF OUR NATION IS AT STAKE!

Trump too had his allies

However in the spirit of fairness, President Trump had his proponents. Of course, due to the public outcry they are very selective with their words of support. A prime example of this is the CEO of sportswear brand Under Armour Kevin Plank.

The dissent at Under Armour

In a recent interview, Plank said, “To have such a pro-business president is something that is a real asset for the country. People can really grab that opportunity.” “He wants to build things. He wants to make bold decisions and be really decisive,” Plank said. “I’m a big fan of people that operate in the world of ‘publish and iterate’ versus ‘think, think, think, think, think. So there’s a lot that I respect there.” However, Plank in his moment of high praise for his esteemed leader forgot that his company was diverse and that there would be a difference of opinion.

Hence enter Under Armour’s most popular and visible athlete, NBA superstar Stephen Curry. “I agree with that description,” Curry said, “if you remove the ‘et’” from asset. Another popular personality that endorses Under Armour is ballerina Misty Copeland. She took to social media outlet Instagram to share her thoughts. “However, I strongly disagree with Kevin Plank’s recent comments in support of Trump as recently reported,” said Copeland. Plank was officially embarrassing himself in front of the money. Other notable objectors included actors, Dwayne “the Rock” Johnson and Emily Rossum.

Under Armour has since released a statement clarifying Plank’s statements, or so they claim.

In conclusion, how can one logically think that in the age of technology, data and information that exclusion is the best tactic in terms of safety? Most of all where does it end? Today it’s seven countries. Tomorrow, fourteen? Today, it’s Muslim majority countries, tomorrow Protestant denominations?  See this for what it is, an obvious attack on a specific way of life. The President assumed office on January 20th. This is only the first month of his stewardship. What will he do in the next forty-seven?