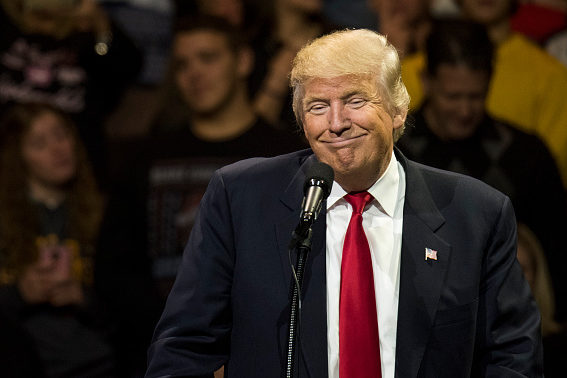 Anyone who thought that, having won the election, Donald Trump might tone down his rhetoric has been proved wrong in the past few days and weeks. From suggesting that millions of ‘illegal’ votes were cast on the 9th November, to opening a particularly lively can of worms by bringing a phone call with the Taiwanese President into the public eye, to his reaction to Fidel Castro‘s death, he’s not been unwilling to stir up controversy.

None of what he has said has been necessarily false or unpleasant—”Fidel Castro is dead!” was undeniably a very accurate statement—but the bluntness with which he has expressed himself at times has been at the very least a tad undiplomatic. Many have expressed outrage at his utterances, but what they don’t seem to realise is that they could very easily be playing into his hands.

Trump’s far-fetched promises have been well-documented. It will be very difficult for him to deliver on a large number of them. He has already reduced his goal for building the infamous “wall”; proving that a ban on Muslims entering the country is constitutional will be nigh on impossible; Hillary Clinton probably won’t be going to jail in the near future. The President-elect, therefore, has a job on his hands to keep his supporters on his side.

A much smaller percentage of the American population actively agrees with or admires Trump’s more divisive views than is commonly made out. Some may try to claim that he won the election because America is a “racist” country, but the reasons for his victory are much more complicated than that.

There certainly was a healthy section of Trump supporters who were pretty unequivocal in their support for him. These people—the kind who make the media headlines and can be seen in videos on Twitter and YouTube—only make up a fraction of the electorate. It’s a big enough fraction to give any candidate a solid foundation in the primaries, but no one can become President through the support of this particular cult alone.

Since this group aren’t going to be switching to the Democrats any time soon, Trump doesn’t have to worry too much about getting their votes. It’s likely that he has continued to make controversial statements to keep their enthusiasm for him at a high level, but he can rely on their support in 2020.

One of Trump’s main vote-winners was a relatively simple one: he wasn’t Hillary Clinton. It can’t be denied that he did a very good job of this. What’s more, he was pretty effective in getting the most out of the faults of “Crooked Hillary“. She provided him with ammo that saved his blushes on multiple occasions, even when it looked like there was no coming back.

It’s unlikely that he’ll have this bonus in 2020, which means that there’ll be a lot of people who are much less willing to vote for him. To retain the Presidency, he will once again need to convince the electorate that he is preferable to the other candidate.

One of the many problems in Hillary’s campaign was that she said next to nothing about her own policies which was memorable. Her message seemed to be that it was “her time” to be President—almost like the next in line to the throne in a monarchy—and that Trump was a bad candidate. The emptiness of this almost patronised voters, and pushed people towards a man whose message was hardly clear, but at least resonant.

The disaffected working-class, one of Trump’s most important demographics, will be more difficult to please; it’s harder to get those who want to give the “establishment” a kicking to vote for you when you’re the one in power. If as President he can’t deliver on any of his promises regarding employment, it will be very difficult for him to win any of their votes, depending on the quality of the Democrat candidate standing against him.

The progressive wing of the Democrats (those who haven’t been crying over the result, that is), in particular Bernie Sanders and Liz Warren, has set to work on trying to turn the party’s message into something which might actually appeal to voters since the defeat. There’s no way that Trump could beat a strong Democratic Party if he doesn’t live up to his promises, unless they fall into the traps which he has already started to set.

“Nobody should be allowed to burn the American flag – if they do, there must be consequences – perhaps loss of citizenship or year in jail!”

This recent controversy was one of the best examples of Trump’s adversaries falling into one of his traps. The President-elect said something rather outrageous—un-American, almost—designed purely to wind up his opponents. Not long after the offending tweet, a group of activists were seen burning an American flag outside Trump Hotel.

Did they not see how they were playing into his hands? Trump and his supporters now have an easy opportunity to depict “liberals”, “leftists”, or whatever other labels are used to describe non-Republicans as America-hating, whining extremists. Don’t bet against one of his campaign team having the images of those activists burning the flag saved away for future use. Where Trump should have been in the wrong, he won a minor victory.

The silence on the part of the less radical and/or more high-profile opponents of Trump’s Presidency, however, was much worse for their cause than the reaction of the NYC Revolution Club. They were handed an opportunity to point out that what the President-elect said was any one of unconstitutional, un-American or simply unintelligent. By doing little to make their voice heard, they made the actual act of burning the American flag the only response to Trump that made the headlines.

There is no doubt that a Democratic Party with a message that appeals to voters will have a very good chance of beating Trump in 2020. What needs to change, however, is the way they fight him whilst he’s in power.

If Warren and Sanders succeed in moving the Party to the left on some issues, some good will have come out of losing the election for the Democrats. What centrists the world over either deny or seem not to understand is that there is a real appetite amongst a large number of voters for governments which are relatively far to the left on economic and other issues.

Social media and the cultural hegemony enjoyed by elites in areas such New York and California in the States and London in the United Kingdom has made politicians forget and ignore the desires of many groups of people, the most burning of which is for regular employment; protecting jobs and raising workers’ wages are hardly election-losing ideas. What progressives and liberals need to learn is that they have to win the personal battles as well as the policy ones. Unless they can prevent themselves from being depicted as soft-headed and unpatriotic, they’ll continue to lose elections which they should be winning with ease.