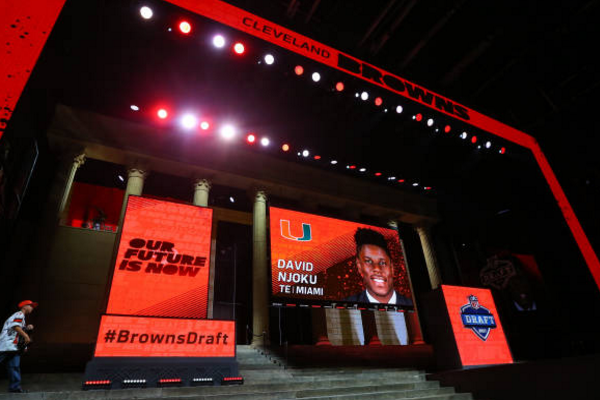 It is always fascinating to see someone with a different opinion. A contrarian if you will. These are the people that see a problem not solely for what it is but also an interesting solution in the making. Over the recent history of modern sports, no one would mistake the professional sports teams in the state of Ohio as being contrary in the least. There was a paradigm shift in the NFL. By trading for Brock Osweiler, the Cleveland Browns changed the status quo.

The Houston Texans and the Cleveland Browns had a transaction with each other. The Texans sent quarterback Osweiler, a 2018 second round draft pick and a 2017 sixth round pick (Number 188 overall) to the Browns for a 2017 fourth round pick (Number 142 overall). The Texans last year signed Osweiler to a four-year deal worth $72 million. The crux of it is that the Browns effectively paid $16 million for a second round draft pick. This is bearing in mind that Osweiler’s performances last season were inconsistent at best.

Fast-forward to the draft

The Browns went big-game hunting in the first round of the 2017 NFL Draft. Of course, they had the dubious yet often fought over honor of the first selection. Speculation was rife, as consensus top talent, Defensive End Myles Garrett was beginning to sour in the mind of experts. The new flavor was Mitchell Trubisky from University of North Carolina. Trubisky is a quarterback and looks it. However, all of the quarterbacks were initially projected as projects. There was great chatter that non of the quarterbacks in the draft were top ten worthy picks. But as draft time came closer, the experts began to talk themselves and the public into believing some of these players were worth the risk.

The Browns brain-trust, led by Executive Vice President of Football operations Sashi Brown, are now operating on a full scale rebuild. Brown and the owner thought it prudent to hire a strategist who was not a “football guy”. That strategist’s name is Paul DePodesta. Having DePodesta was one of the architects from the Oakland Athletics successful run during the “Moneyball era”. Moneyball was coming to football. DePodesta’s first task was assigning value to the assets the Browns had and acquisition of more assets whenever possible.

Prior to the draft last season, the Browns traded the second overall pick to the Philadelphia Eagles for three picks in that draft, a first round selection in the 2017 draft and a second round selection in the 2018 draft. The Browns paid a price for that trade. In addition to the Eagles drafting quarterback Carson Wentz, the Browns also gave up their 4th round pick in the 2017 draft. What the Browns have appeared to have figured out? The NFL draft is a lottery, a grand sweepstakes. In order to win the lottery, one is required to have lottery tickets. The more tickets one possesses, the better his/her chances of success. Of course, this is a matter of degrees as well. The Browns brain-trust was acutely aware the team had needs at every position. Thus, acquiring picks was intelligent.

Brown and DePodesta are taking the long view in terms of success. The Browns who have been the laughing stock of the NFL since its return to Cleveland in 1999, understood that building the team would require time, patience, skill and a little luck. The key to the luck may very well lie with the owner Jim Haslem. Haslem inspired by a homeless person selected former Heisman Trophy winner Johnny Manziel in 2014. Well, that worked out very poorly, as Manziel is not in the NFL currently. The Manziel experience drove Haslem to re-think his philosophy and ultimately reset the franchise’s priorities. Since their return in 1999, the Cleveland Browns started 24 different quarterbacks. In comparison, the NFL champion New England Patriots started 5 different quarterbacks in that exact timeframe. As a franchise, the Browns (a proud franchise) were a laughing stock.

Back to the Texans

With Garrett in tow, NFL pundits all spoke of the Browns needing to draft a quarterback. So what did Sashi Brown and DePodesta do with the pick they got from the Eagles last year? They fielded offers for it. And who would want to do business with them one may ask? Well, the team and GM that felt they got a great deal previously. Enter for Act 2, the Houston Texans and GM Rick Smith. The Texans badly needed a quarterback to fully extinguish the stench of the Brock Osweiler experiment and with (two time Heisman finalist Clemson’s quarterback) Deshaun Watson still available, the Texans pounced (allegedly). The cost of this deal? The Browns sent the 12th overall pick and received the 25th pick and the Texans 1st round selection in the 2018 draft. The Browns subsequently selected talented Safety Jabrill Peppers.

Looking at the cumulative effect of both deals with the Texans, the Cleveland Browns gained 4 draft picks (lottery tickets remember), two draft swaps and an overpriced quarterback. In effect, for $16 million, the Browns purchased 4 draft picks over the next two drafts. From a purely analytical perspective, this appears to be very shrewd maneuvering by the oft incompetent Browns. After making a trade with the Green Bay Packers, the Browns selected athletic tight end David Njoku with the 29th overall pick. That said, the optics left many football purists unimpressed. A team cannot win without a quarterback is the criticism of choice. Here’s an excerpt from ESPN’s Kevin Seifert:

But failing to use any of them on a high(er)-end quarterback will doom them in the short term and midterm. Unless you think the Browns can grow with 2016 third-rounder Cody Kessler or — gasp — recent acquisition Brock Osweiler, it’s difficult to see how they can move forward while continuing to slow play the position.

The Browns have outsmarted themselves.

Mr. Seifert’s assessment was somewhat premature. CBS Sports’ Rob Rang was more subdued in his questioning of the Browns moves:

The trio certainly looks impressive on paper, with Garrett expected to be an instant superstar off the edge in Gregg Williams’ highly aggressive defense, Peppers well-suited as the ‘rover linebacker/safety so en vogue against today’s diverse offensive alignments (think Deone Bucannon and Mark Barron), as well as in the return game, and Njoku a legitimate seam threat. Of course, if the Browns still need to address the quarterback position …

But the Seattle Seahawks won the Superbowl recently with a 3rd round pick at quarterback. There is an old adage that “defense wins championships”; not for the critics though. Their point of view is, a team cannot win without a quarterback. Of course a factor that is possibly understated is, Head coach Hue Jackson is exceptional at developing quarterbacks. Many acknowledge that but sarcastically. They call Jackson, “a Quarterback Whisperer”. Jokes aside, Jackson helped develop several NFL starting quarterbacks including Patrick Ramsey, Carson Palmer, Joe Flacco, Andy Dalton and others.

Having several assets at hand, allows a team flexibility. With that flexibility in tow, the Browns selected former Notre Dame quarterback DeShone Kizer late in the second round.

Reaction: swift and mixed as expected.

I was not in favor of trading up to get #Browns Deshone Kizer. But with their QB position he is worth drafting here. He has a big time arm

Everything I want in a QB is on Kizer's tape. There just isn't any consistency. Give him time. Absolutely worth a shot with the 52nd pick.

Such a Browns move that on a team without a veteran QB, to take the QB that his own collage coach said needs more time before playing in NFL https://t.co/lYudtKKVlS

With the first pick of the 3rd round, the Browns selected Larry Ogunjobi, a defensive lineman. The Browns were a laughing stock for many years. No one is laughing now, because quietly and intelligently, DePodesta, Brown, and Jackson are systematically rebuilding this franchise. A big part of success in sport is unexplained. For the sake of this article, it’ll be named “luck”. Here’s to hoping,  the moves made thus far and those moves yet to be made that the Cleveland Browns possesses that ‘luck’ that propels them from the purgatory of mediocrity. If nothing else the Cleveland Browns have changed the status quo.