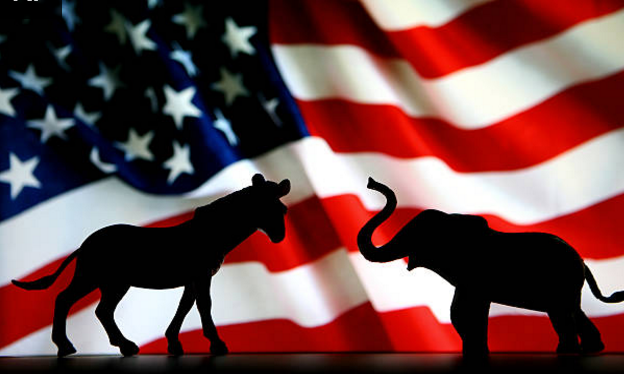 It is often said that our country is rapidly becoming more partisan. We can see evidence of this almost daily. The House and Senate are breaking along party lines more often. Political dialogue is almost entirely partisan now. We see the fights of “left vs right,” “conservative vs liberal,” and “Republican vs Democrat” just about everywhere. Is it true, though, that our politics are polarizing?

Political conversation is unique in that the perception shapes the reality far more than the reality shapes the perception. It doesn’t matter if, for example, Donald Trump really won the popular vote due to the preponderance of voting fraud in Hillary Clinton’s favor. If enough people believe it and make a campaign issue about it, politicians will address it. Or, for an example on the opposite side of the aisle, it doesn’t matter if women are actually only paid 77% as much as men. If enough people believe it and advocate to fix it, it will become a campaign issue and something that stays in our public political consciousness.

In the internet era, it is easier than ever for people to access perceptions about politics. No one needs to rely on local newspapers or travel to a library to research contemporary issues. Everything is at the tips of all of our fingers, and most of us will see political positions whether we want to or not. Similarly, in the cable news era, people have access to 24/7 coverage of political issues–from anything as silly as what a politician is wearing to breaking news about policy decisions and elections.

The main point that cannot be–but often is–forgotten is that none of these networks or websites exist solely to share news. Nor do most, as many people would like to believe, have any particular agenda about what politics they want to indoctrinate into their readers or viewers. No, news outlets exist to make money.

News publications, whether print, digital, or on television, care about eyeballs more than anything else. Any mainstream website needs consistent and large readership to make money. Cable TV networks get better advertising dollars and can charge more for monthly subscriptions if they draw more viewers. Newspapers are entirely dependent on subscriptions to remain solvent. Having a political agenda doesn’t do anything if you can’t afford it.

We can talk about how conservative FOX News is and how liberal MSNBC is, but at the end of the day those networks exist to meet a demand that already exists. FOX News Channel was the most-watched cable network in the country in 2016, surpassing ESPN thanks to a huge boost because of election coverage. If FOX didn’t want to be the conservative news outlet, someone else would step up. That’s just too much money for someone not to take advantage of. CNN and MSNBC, known as the networks that liberals go to watch, combined to basically equal FOX News’ television share (averaging about 2% fewer daily viewers than FOX News). That’s a ton of money also. If those networks didn’t want to be the ones with a liberal slant, then some other network would step up to fill that obvious position.

In our world of constant access to news information, a polarization among networks and coverage is easily understandable. Any middle-of-the-road news network won’t have any particular pull towards a particular audience. For example, local morning and evening news broadcasts are rarely politically skewed, because all they do is provide a source for people who want a quick recap of stories of local interest. Someone doesn’t have to go out of their way to look for that. Viewers will turn on a station if they’re interested in hearing some news; otherwise they won’t. What someone does need to specifically choose, though, is a consistent 24-hour news station.

A news network without a political slant will get viewers, sure. However, that’s not a way to draw viewers to a network. You draw viewers to a network by providing programming that people specifically want to go out of their way to see. In essence, that means catering to individual political desires because that’s what guarantees that these individuals will come back. For FOX News, that means slanting your coverage conservative; for MSNBC and CNN, it means slanting liberal. The same basic concept holds true for printed media, online media, or any other form of media that requires a consistent stream of income to function.

Pandering to those who are most invested in the system works because those are the people–those with dedicated political opinions–are the ones that will most likely go out of their ways to consume political media. It is the same basic principle as to why candidates run much more hard-line campaigns in primaries than in the general election. Primary voters are generally the more dedicated political members of the population, which generally brings more hard-line positions. Candidates have to win over those voters to win the primaries, and then they can pivot to the center for the general election. Those primary voters are the types of people who political media are the most interested in targeting as well, because those are the viewers and readers that come back time and again.

The outcome of all of this, though, is that those positions that the hard-line citizens want to hear are those that get played out on cable news and digital media. No strong liberal will come back as consistently to a station or site that starts espousing even moderately-conservative viewpoints; likewise, no strong conservative is going to be interested in consistently watching a channel or reading a web site that is telling him moderately-liberal points that he doesn’t want to hear. And in our world where political perceptions shape reality, it is very easy to see our country as one where only those strong partisan positions exist. And, of course, the consistent reinforcing of partisan ideas and ideals in the media only serves to harden and sharpen the opinions of those exposing themselves to only those ideas. It’s a cycle that repeats itself–voters choose what they want to see, which reinforces their own ideas; media show voters what the voters want to see; and politicians, seeing all of this, adjust their positions and policies accordingly.

However, reality does not match that perception. There are no hard numbers on this and poll numbers change year-by-year, but generally more Americans identify as independent rather than either Republican or Democrat. A plurality of this country still holds viewpoints that are nuanced enough (or, in rare cases, extreme enough) to not fit into either party. This center, one that probably outnumbers either partisan group, has rapidly lost places that fit in with its political leanings to find news. This center’s voice, while still strong in elections, is rapidly being lost in everyday political discourse.

In a world where websites and cable news networks pander to those viewers who are most dedicated and will consistently come back, what room is there for the large swath of the country who wants to see nuanced discussions and hear opposing viewpoints? There are too many people who are interested in such things for a market for them not to exist. Even if those on the center of the political spectrum won’t be the most dedicated of viewers or readers, there should still be more than enough interest for a media group in the middle to be fiscally viable.

It is true, though, that the extremes are becoming more polarized. Again, this makes perfect sense. In a world where someone’s constant media exposure is “House Republicans did dumb thing X” or “college liberals did crazy thing Y,” why wouldn’t discourse become far more polarized? The center might still be interested in listening to both the left and the right, but it has become more than clear that the left and right are becoming less and less interested in talking to each other.

Where does this leave the center? At some point, those who want nuanced discussion will have to take responsibility for themselves. We usually see grassroots political movements forming on the fringes–it’s usually those with extreme political positions that need to band together to have their positions heard. Now, the political center in America is the one whose voice isn’t heard. I don’t know if we will see it, but I do know that those in the center of the political spectrum–who want nuanced political discussion and who don’t fit in to either party–will need to form their own grassroots movement if they want their voices to be heard in political discourse again.