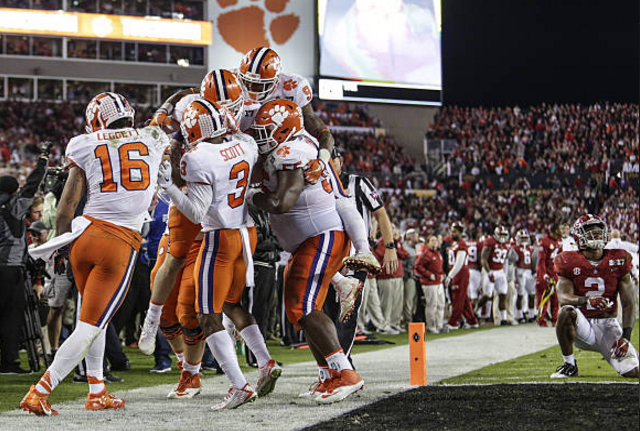 It’s College football prediction time of year. Your pitcher has thrown to first twice and here comes a lengthy mound visit.  The heat is weighing on your head and that foot long chili cheese dog is rolling in your gut. In your feverish uncomfortable daze what’s on your mind? The 2017 college football season of course.  So let us speculate from a factual point of view the status of the SEC and ACC.

The SEC east-On paper, the SEC East appears to belong to Georgia in 2017.  We have been here before but UGA appears to have the least amount of uncertainty of the SECE teams.  Georgia has 17 returning starters, tied for third most nationally, and they sit 9TH in returning production. With that being said one might expect a wild season out east. Kentucky returns their top quarterback and 17 total starters. South Carolina returns their quarterback and 16 starters from the previous season. Florida added Notre Dame graduate transfer QB Malik Ziare, and if he makes a smooth transition the Gators will be capable of stealing the east again. The SEC West could drop a few cross-division contests this season.

Don’t Sleep on: Vanderbilt. They are always picked last or close to it but they return 16 starters and their quarterback.

The SEC West- Ole Miss and LSU return 11 starters, just like Alabama for 2017. That hasn’t stopped nearly everyone from penciling in Alabama as the favorite from the west and most likely SEC champion. The winner of the Alabama/LSU game is in great position no doubt. However, Auburn returns 15 starters and their quarterback.

Don’t sleep on: Ole Miss got Shea Patterson some much needed experience after Chad Kelly was injured.  Patterson’s talent could make this less powerful yet prepared Ole Miss team a factor in the West.

The ACC Coastal– Much of the ACC coastal will not have a great deal of experience this season.  UNC and Va. Tech will both replace their starting quarterbackss. Some expect Mark Richt to claim the ACC Coastal in 2017 even with the loss of Brad Kaaya. It will be a process as Miami returns 15 starters but less than half of their production from last season. Georgia Tech could be Miami’s stiffest competition, returning 16 starters, and although they also will groom a new starter at quarterback they can make life easier for a QB given their style of offense.  Virginia Tech will bring back 12 starters while Duke returns 14 and their signal caller from 2016.

Don’t sleep on: Virginia. Quietly returning 14 starts and their quarterback, UVA will look to make a lot of progress in 2017.

The ACC Atlantic– This is going to be an entertaining division race in 2017. Clemson, the defending national champions, must find their new quarterback quickly. Clemson is loaded with talent but only returns 12 starters. Florida State returns a quarterback and 16 starts, and NC State returns their QB and 17 starters. Louisville only has 12 starters returning but they do have lightning in a bottle in Lamar Jackson.

Don’t Sleep on Syracuse. Syracuse is going to upset someone this season. Returning their quarterback, they lead the nation in returning starters at 20. You might also keep an eye on Wake Forest returning 15 starters, a QB, and a very high percentage of their 2016 production.

For the Gamblin’ man  10 Over/Under teams to watch

Clemson 9 Wins- A popular under candidate at the moment. Their division has really toughened up, and they need some big pieces to fall into place. They must hit the ground running to keep up with Florida State, Louisville, and NC State. Clemson will get Auburn and FSU at home while the travel to South Carolina, Virginia Tech, and Louisville.

Kansas State 7.5 Wins– Multiple publications say this is Bill Snyder’s best team thus far during his time as Kansas State. The trend is to take the over.

Kentucky 6 Wins– Kentucky has two capable QBs and a lot of returning talent. If they can avoid injuries and turnovers the over makes sense here.

Michigan 9 Wins– The under makes a great deal of sense, here given Michigan returns only the fewest number of starters in the country.

South Carolina 5.5 Wins– South Carolina has a tough schedule, but they have Jake Bentley and an offense that should be potent in 2017.

Oregon 8 wins- Willie Taggart has a chance to hit the ground running at Oregon. Taggart inherits a QB and 17 returning players. The Ducks rank 2nd nationally in returning production from the 2016 season.

UCLA 6 Wins– UCLA returns 15 starters and a QB. This could be some easy money to be made.

TCU 7 Wins- TCU has 17 returning starters And a quarterback. It makes sense to expect a bounce back from the Horned Frogs.

Louisville 9 Wins– Lamar Jackson might not have enough around him in 2017 to achieve 9 Wins. They only return 4 starters on offense.

Michigan St 6.5 Wins– One might take the under as MSU is returning very few players from an already very bare cupboard last season.