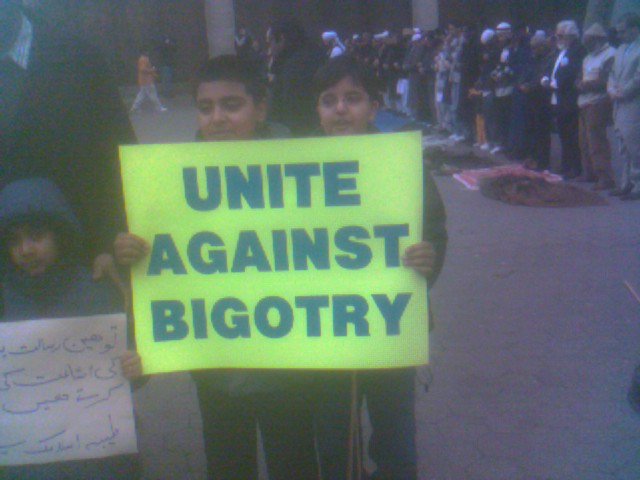 The controversy began when a lesson in World Geography class asked students to copy a statement in Arabic calligraphy. The phrase was of Islamic faith but the students were not asked to recite or translate the phrase, rather the exercises purpose was to have students understand the artistic complexity of calligraphy.

In addition the class also covered other religions such as Christianity, Judaism, and Buddhism.

After some students refused to complete the assignment, several parents protested at education meeting this past week. The ring leader of the protest Kimberly Herndon, called the assignment “indoctrination“.

Herndon asked for the firing of Cheryl LaPorte, the teacher for:

“giv[ing] up the Lord’s time. She gave it up and gave it to Mohammed,”

Her truth was spoken though during another section of the class. Here we have a double and that’s why another teacher, Debbie Ballew spoke out against Herndon and said that there was a double standard and if Ballew had asked children to copy passages from the Bible, she would have been fired.

“The students were presented with the statement to demonstrate the complex artistry of the written language used in the Middle East, and were asked to attempt to copy it in order to give the students an idea of the artistic complexity of the calligraphy,” according to Bond’s press release. The statement was not translated and students were not asked to “translate it, recite it or otherwise adopt or pronounce it as a personal belief.”

The only problem with here is the class was found to be in compliance of Virginia Standards of Learning and LaPorte had taught three other religions in the class but only Islam was taken out of context because of fear. In each section of teaching, the students were given the opportunity to look at every aspect of each culture. There was no backlash against Christianity, Judiasm, Buddhism, but when Islam is used there was mass hate. This shows deeply conceited and afraid people have become to outside views.

John B. Parker of Waynesboro said it best on Facebook.

“Are any of you deeply disturbed parents concerned that your child might convert to Islam? “Is that the fear here? If you are far enough out of touch with your own child that you think their geography teacher might convert them to Islam against your will, then maybe it’s time to turn off the TV and spend some time with your kids. Besides, if they don’t learn about Islam at school, how will they know who to hate? Writing something on a piece of paper doesn’t make it true. We’re talking about Muslims, not witches.”

Just remember, Islam doesn’t equal terrorism, no matter how much Conservatives think it does.